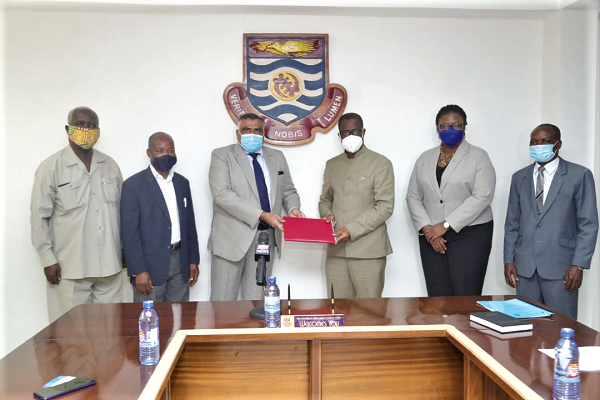 Park Agrotech Limited, the strategic investor for the Komenda Sugar Factory, has signed a memorandum of understanding (MoU) with the University of Cape Coast (UCC) for technical and human resource support to operationalise the factory.

The MoU, signed on the university campus last Thursday, details modalities for the production of sugarcane planting materials which are critical to the sustainability of the factory.

It also spells out arrangements for the provision of critical infrastructure that will boost research into sugarcane production.

The outgoing Vice-Chancellor of the UCC, Professor Joseph Ghartey-Ampiah, signed the MoU on behalf of the university, while the Managing Director of Park Agrotech, Mr Lalit Mishra, initialled it for the company.

Additionally, the company will provide funding for research and equipment in critical areas such as biotechnology and tissue culture, disease and pest control, soil fertility, agricultural engineering and food science.

For its part, the UCC will provide strategic technical and human resource support to produce sugarcane planting materials for the company and its out-growers to sustain sugarcane production and processing.

Among other things, the university will also provide land for the establishment of a sugarcane field gene-bank and conserve the eight most relevant genetic resources of the crop, in consultation with the company, to serve as a source of explants for vitro propagation.

Prof. Ghartey-Ampiah said the agreement was a major milestone in the road map to operationalising the factory.

He said it was refreshing that after a long period of being idle, concrete steps were being taken to revive the factory to meet the aspirations of Ghanaians.

For his part, Mr Mishra said he found the partnership with the UCC crucial to the survival of the factory, as the company required quality planting materials to produce sugarcane to feed the factory.

He said the company would invest about $21 million in the factory for the next four years.

Mr Mishra said structural maintenance works had started on the factory and were progressing steadily.

The Head of the Department of Molecular Biology and Biotechnology at the School of Biological Sciences, College of Agriculture and Natural Sciences, UCC, Prof. Aaron Asare, said the university was committed to the agreement and would help revive the sugar factory.

He said apart from being a viable source of livelihood for many residents of Komenda and its environs, the factory was also a national asset that must not be left to rot.

He described the signing of the agreement as a giant step towards reviving the factory, especially so when one of the reasons for its dormancy  over the past three years was the lack of adequate and the right quality of sugarcane for the factory to operate at its maximum capacity.

He said the UCC had, since 2015, undertaken a series of research to produce high-yielding sugarcane planting materials to address the huge feed-stock deficit of the Komenda Sugar Factory to ensure its sustainability.

Prof. Asare added that with the university’s research prowess in that area, he was optimistic that the collaboration with Park Agrotech would help the two institutions harness their capacities to make the factory productive.

In 2016, the government secured a $35-million loan from the Export-Import (EXIM) Bank of India to set up the factory.

An additional $24 million was set aside to support out-grower farmers.

The factory was inaugurated on May 31, 2016 to produce sugar, but it became stillborn due to a multiplicity of factors that were described as "technical and operational challenges".

For more than three years now, the factory was left to deteriorate.

However, on June 3, 2020, the Minister of Trade and Industry, Mr Alan Kyerematen, announced in Parliament that the Cabinet had officially approved Park Agrotech Limited as the strategic investor to operate the factory.

He added that STM Project Limited, which will serve as the technical partner, was a company renowned for sugarcane development and sugar plant modernisation, expansion and rehabilitation for more than 200 sugar factories in India and other parts of the world.

The UCC was also expected to provide technical support for the partners.

The transaction advisor, PricewaterhouseCoopers (PwC), told the Daily Graphic during a visit to the plant site last year that Park Agrotech was expected to invest in sugarcane cultivation, plant and machinery and working capital to bring the ailing factory back on its feet.