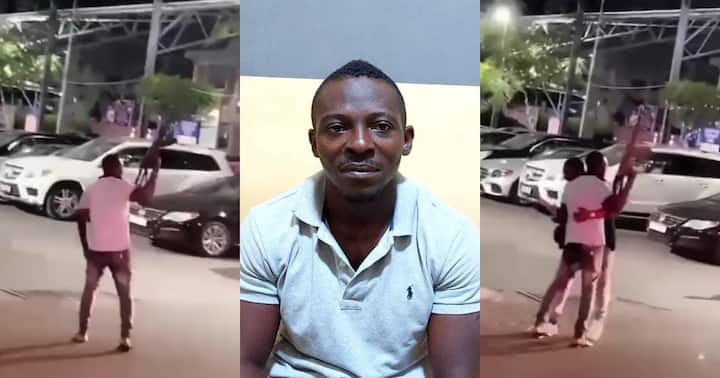 The soldier, Flt. Sergeant Nicholas Owusu Frimpong, seen in a video shooting into the air at a public place at the A&C Mall at East Legon in Accra, on New Year's Eve, has been charged and facing military trial.

This follows the completion of the investigation into the case by the Ghana Armed Forces (GAF).

He was arrested following an investigation into a viral video that showed a man firing several shots of a firearm at the A&C Mall in Accra at dawn on January 1, 2022.

During the police investigation, it was revealed that the man at the centre of the incident was a soldier. He was identified as Flt. Sergeant Nicholas Owusu Frimpong, stationed at the Airforce Base in Takoradi.

The police then handed over to the military for military disciplinary procedures to take place first.

He was subsequently detained by the Military Police whilst the investigations continued.

Giving an update on the case in a radio interview with Citi FM on Monday [Jan 24, 2022], the acting Public Relations Director of the GAF, Commander Andy L. A. Anyane said the investigation concerning the incident is complete.

He said a report has been submitted and per military investigative procedures, Flt. Sergeant Nicholas Owusu Frimpong is supposed to be tried by his Commander, who is at the Airforce Base in Takoradi, in the Western Region.

The charges have been forwarded to his commander and a board will handle the trial, he said.

He said the investigation was conducted by the Military Police.

Commander Anyane did not disclose the charges leveled against Flt. Sergeant Nicholas Owusu Frimpong, but said the Military High Command "takes a serious view of the action and so the proper charges will be preferred."