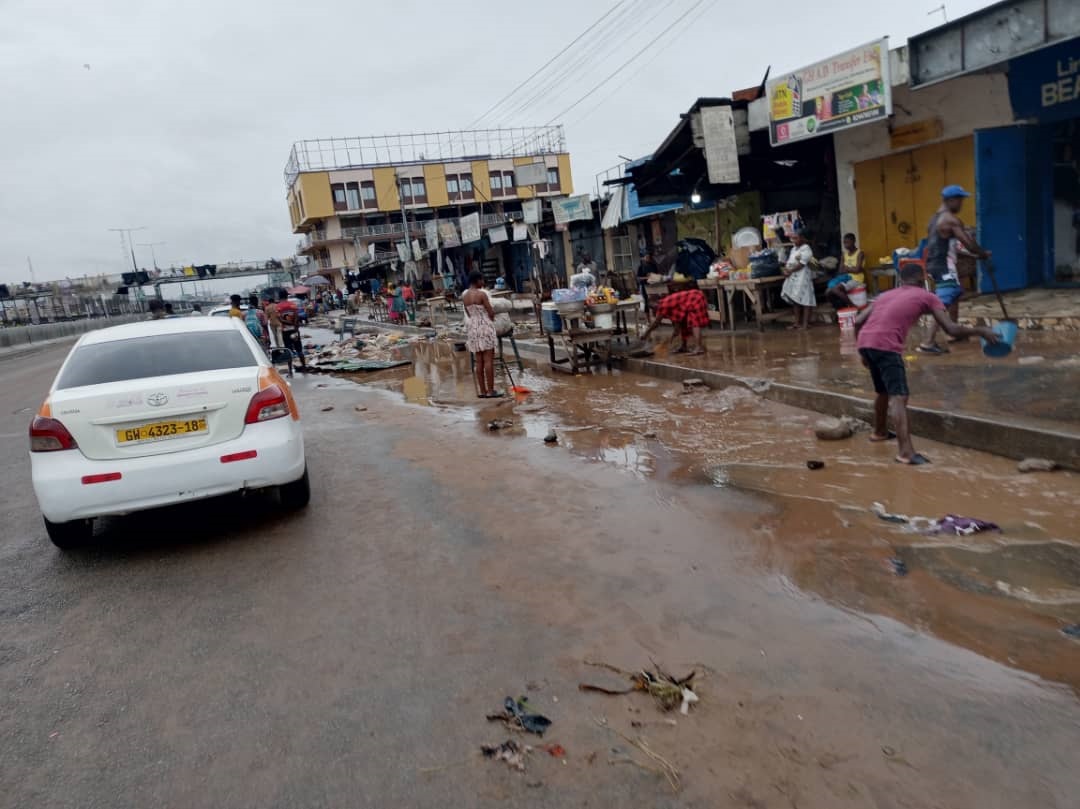 Many residents of the Greater Accra Region and parts of the Volta Region are counting their losses after a sustained downpour experienced in the southern and middle parts of the country last Saturday left homes and streets flooded.

Flood-prone areas such as Odawna, Abossey Okai, Kaneshie, Agbogbloshie and the Nungua Barrier in Accra were submerged, with many residents struggling to find sleeping places.

Many streets in the capital, including ceremonial roads, had flood waters on them, which has left debris and silt on some of them.

The most affected area was the Kaneshie-Odorkor stretch of the Accra-Kasoa road, which was overwhelmed by flood waters, making it impossible for vehicles to move last Saturday night.

Traffic on the Kasoa-Mallam road was disrupted by mudslides from the nearby disturbed hills and ridges up to yesterday morning.

The Kaneshie Market, the Kaneshie First Light and the Accra Academy portions of the K.A. Busia Highway were submerged, making pedestrian and vehicular movement virtually impossible.

When the Daily Graphic visited the Kaneshie enclave around 6 a.m. yesterday, the water had receded, but not without leaving behind a devastating impact.

It was observed that about 30 metres of the Accra Academy fence wall had been brought down by the floods, with other portions facing imminent collapse.

Portions of the tarred road between Accra Academy and Kaneshie First Light had also peeled off as a result of the intensity of the rain.

Some of the concrete slabs in the median of the road from Kaneshie First Light to Accra Academy were also removed by the water.

The Assembly Member for the Xikpo-Agbagorme Electoral Area in the South Tongu District in the Volta Region, Johnson Cobby Amedzo, said officials of NADMO had stopped providing the community with relief items due to the rampant nature of the challenge.

He said the people would engage the authorities to construct a proper drainage system for the community, which got flooded at the least rainfall.

At the Kaneshie Market, the Kwame Nkrumah Interchange, Odawna and Nungua in Accra, the Daily Graphic observed yesterday morning that some residents and traders were busily salvaging their wares and clearing debris for business to commence.

Some also used various means to get rid of stagnant water in their shops and rooms.

Along the Abossey Okai-Agbogbloshie road, it was observed that the gutters were choked with plastics and other materials carried by the flood water.

Residents of the Old Fadama slum community at Agbogbloshie were also hard hit by the rains.

Many of them were seen clearing water from their rooms, while others dried personal effects in the sun.

One of the affected residents of Old Fadama, Michael Gyagri, told the Daily Graphic that his room had been inundated with flood water.

"Even though the rain has stopped, I am still trying to clear water from my room. The water keeps coming from beneath the ground. I will be sleeping with my friends until my room is fixed," he said.

The Minister of Works and Housing, Francis Asenso-Boakye, yesterday afternoon undertook an assessment tour of some flood-affected areas of Accra.

In the company of officials of the National Disaster Management Organisation (NADMO), the minister saw for himself the impact of last Saturday's downpour on communities and commercial areas in Accra.

The areas visited included Odawna Garages in the Korle-Klottey municipality, the Iran Clinic at Adabraka, near the Overhead Bridge, Adabraka and Asylum Down.

The rest were the Neoplan Station at the Nkrumah Interchange, Osudoku, Pharmanova, Tintara, all in Osu, and Tse Addo in La.

While admitting that the sizes of the drains were a contributory factor to flooding in Accra, the minister said the government had, over the last five years, invested GH¢450 million in the expansion of drainage works in the capital city.

That, he said, had included drain deepening, concrete lining and increasing the capacity of the drains to be able to carry storm water to prevent floods.

He was, however, quick to add that there were other causes of flooding, besides the sizes of the drains.

"The first one is the indiscriminate dumping of solid waste into the drains, and the other one, which is equally important, is the haphazard development of our communities," Mr Asenso-Boakye indicated.

He noted that areas such as Odawna needed serious engineering works, saying the government had put in place remedial measures to mitigate the impact of floods.

He said the government, through the Greater Accra Resilient and Integrated Development Project, was investing $200 million in the construction of detention ponds upstream of the Odaw Basin.

That, he said, would help hold large volumes of water that usually led to flooding, especially around Odawna.

“This channel receives rain water from the mountains, and that is one of the leading causes of flooding within the area. It has become necessary for us to build detention ponds along the channel from the Aburi Mountain,” he said. 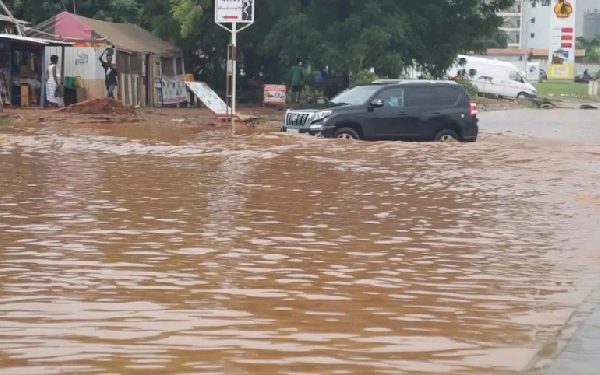 The Works and Housing Minister charged metropolitan, municipal and district assemblies (MMDAs) in Accra to enforce the bye-laws to prevent flooding in Accra.

"Haphazard development of our communities is another major cause of flooding in the capital city. Whenever you are supposed to build, you have to go and get a building permit from the district assembly, but most people don't do that,” he added.

He said it was the responsibility of the assemblies to make sure they issued permits rightly, and that whenever they were not issued, they should be decisive to pull down any structure that flouted any of the bye-laws.

The Director-General of NADMO, Eric Nana Agyemang-Prempeh, told the Daily Graphic yesterday that his outfit was continuing with the exercise to save lives and salvage people's belongings.

"Last Saturday, we did a lot by way of rescue operations and we are continuing because many rooms are still inundated with flood water. Today, we have been pumping water from rooms,” he said.

He said soldiers were brought in to support NADMO in the exercise, as the situation worsened last Saturday.

Nana Agyemang-Prempeh said his outfit would put together a full report on the situation when the exercise was completed.