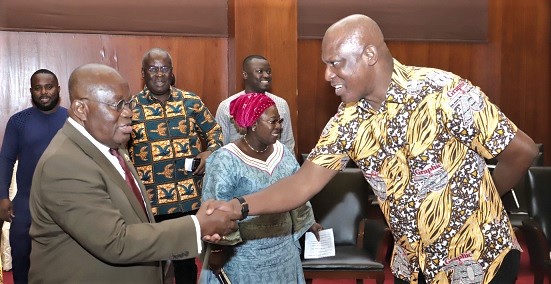 The Managing Director of the Graphic Communications Group Limited (GCGL), Ato Afful, has underscored the significant contribution of the Junior Graphic newspaper to learning and education across the country, particularly in limited-resource environments.

He observed that the youth-friendly newspaper, a brand in the GCGL stables, had become a key learning aid for most young learners, the basis for which it was sold at a subsidised price to enable every young reader to afford a copy.

Mr Afful said this at a ceremony at the Jubilee House last Friday to present prizes to winners of the 2021 Junior Graphic National Essay Writing Competition.
President Nana Addo Dankwa Akufo-Addo presented the prizes to the winners.

The Junior Graphic National Essay Competition is held in partnership with the Sustainable Development Goals (SDGs) Advisory Unit at the Office of the President, with support from BiC, IPMC, the United Nations Children’s Fund (UNICEF) and the Ghana Library Authority.

The competition is organised to improve the reading and writing skills of children in both basic and junior high schools.

It enables the stakeholders to assist pupils and students improve on their reading and writing skills, improve their performance in the English Language and eventually guide the overall performance of young learners.

In all, 20 contestants out of over 2,970 participants who won at the regional level took part in the final stage of the competition.

They were from the Greater Accra, Eastern, Volta, Central and Upper West regions and they wrote essays on the SDGs, poverty alleviation and other social subjects.

In all, 11 contestants won awards at the national level.

Evangelyn Ukoma Awa of the Frihans Educational Complex, Koforidua in the Eastern Region, emerged the national champion, with Kelvin Appiah Ampretwum of the Fedep International School and Adjoa Nyameyie Fletcher of the Pere Planque School, both in Cape Coast, Central Region, as the first and second runners-up, respectively.

Other winners are Bernard Banful and Rachael Hammon-Laast, both of the Stanward School at North Kaneshie in the Greater Accra Region; Nana Ama Nimako Boampong of the St Mary’s Preparatory School, Koforidua, Eastern Region, and Lordina Achiamaa Abebrese of the Peculiar International School, Central Region.

Describing the essay writing competition as a “critical initiative”, Mr Afful said it also tied in with the President's support for the SDGs, of which the GCGL had become a strong partner and advocate.

He expressed appreciation to all stakeholders, particularly the sponsors, and the SDGs Advisory Unit at the Presidency for their tremendous support, saying they had been and still remained the backbone of the memorable occasion.

Throwing more light on reading and its resultant improvement in language, the GCGL MD said: “It is further established by experts, particularly chief examiners of the West African Examinations Council, that when young scholars have a proficiency in language, particularly English, they are able to perform better in other subjects.”

He was particularly grateful to President Akufo-Addo for the practical commitment and the demonstration of support that he gave when the organisers presented the 2019 winners with their prizes.

Mr Afful added that the commitment was for the President to take the ultimate prize winner to the UN General Assembly when the opportunity was available.

He thanked the President for the immense inspiration and concrete support that he continued to give to the project.

The Special Advisor to the President on the SDGs, Dr Eugene Owusu, for his part, expressed delight at the partnership his outfit had established with the Junior Graphic.

He expressed the hope that it would continue to provide the opportunity for selected and brilliant students to meet with the President and share their insights on the SDGs.

He said with just over eight years to achieve the SDGs, it could not be lost on anyone that the time for momentous action was now.

Dr Owusu expressed gratitude for the success of the partnership with the Junior Graphic, which he said continued to sensitise and educate tens of thousands of schoolchildren across the country on the SDGs.

He reminded the public that the 2022 Junior Graphic Essay Writing Competition had just started.