Police retrieve remains suspected to be that of missing Takoradi girls 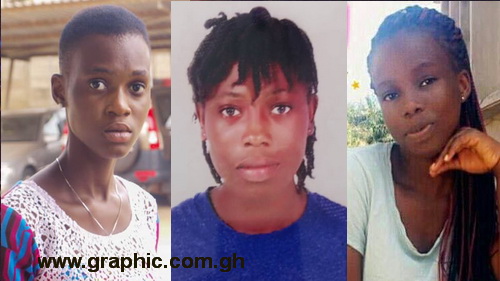 The Police have retrieved some remains believed to be that of the missing Takoradi girls.

The remains were retrieved Friday night from a cesspit linked to an uncompleted building which was previously occupied by one of the accused persons in the case, Samuel Udeotuk-Wills reports Graphic Online's Western Regional correspondent, Dotsey Koblah Aklorbortu.

The police through their investigations got the information that the missing girls were allegedly buried in the cesspit behind the uncompleted building at Kansaworodo in Takoradi.

Subsequently, police officers from Accra stormed the Kansaworodo house of the accused person, on Friday evening and cordoned off the area.

At about 5:30 pm on Friday. Graphic Online understands, with the help of a cesspit emptier from the Prisons Service, they started emptying the cesspit. 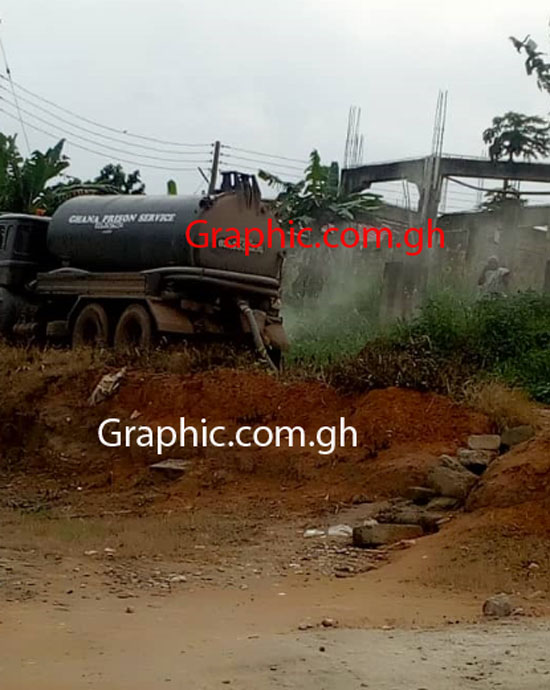 PHOTO: The cesspit emptier belonging to the Prisons Service emptying the cesspit behind the accused person's house

By 8 pm, the officers found the skeletons suspected to be that of the missing girls and moved away from the scene with the skeletons packed in four separate boxes and headed towards Accra.

According to Graphic Online's reporter in Takoradi, Dotsey Koblah Akorbortu, the family members of the missing girls who got wind of the operation moved swiftly to the scene and subsequently moved to Accra when they heard the police were on their way to Accra with the skeletons.

The family members have since called for an independent forensic investigation to establish whether the skeletons found were indeed that of the missing girls. 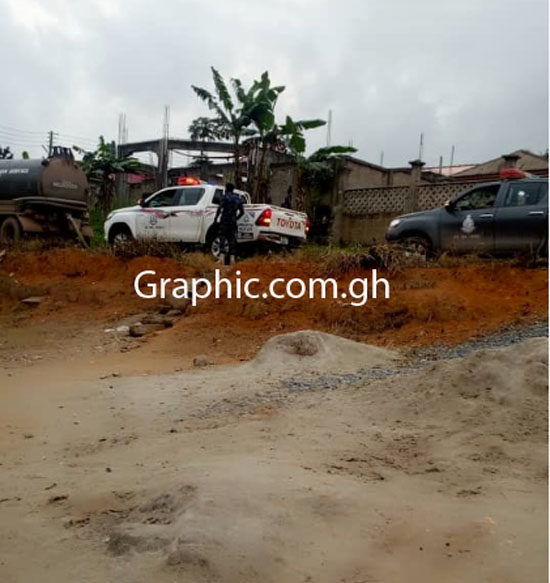 PHOTO: The cesspit emptier belonging to the Prisons Service emptying the cesspit behind the accused person's house with the police officers who cordoned off the area.

In a statement issued by the Head of Public Affairs Unit of the Criminal Investigations Department (CID), Deputy Superintendent of Police, Ms Juliana Obeng, on Friday night, the police said "the discovered human remains would be sent to the forensic science laboratory of the Ghana police service for analysis and further investigation."

"As part of investigations into the three (3) Takoradi kidnapped girls, the Criminal Investigation Department and the Western Regional Command earlier this evening August 2, 2019, conducted an operation at Kansaworodo, a suburb of Takoradi," the police statement said.

"During the operation which took place at about 7 pm, some human remains were retrieved from a septic tank at an uncompleted building. The building was previously occupied by convict Samuel Udeotuk-Wills who is one of the accused persons standing trial for allegedly kidnapping the three (3) Takoradi girls," the police statement added.

The Minister of the Interior, Mr Ambrose Dery, last Tuesday [July 31, 2019] told Parliament that the security agencies were still investigating the missing of the three girls and were hopeful of rescuing them, reports Graphic Online's Parliamentary correspondent, Musah Yahaya Jafaru.

Mr Dery said the government would not relent in its effort to trail the accused persons and other suspects to rescue the girls and send them back to their parents.

Mr Dery, was answering an urgent question by the National Democratic Congress (NDC) Member of Parliament (MP) for Builsa North, Mr James Agalga, on measures the government intends to institute to deal with incidents of kidnapping of young women in the Western Region and other parts of the country.

Mr Dery said one person was arrested in connection with the case in Ghana and another person also arrested in Togo.

He said the police were following the case but indicated that he would not give details of the investigations.

He said the government was in constant touch with the parents of the missing children to give them updates on the investigation.

Mr Dery debunked the claim that cases of kidnappings were on the ascendency and indicated that in the previous regime Ghanaians were not given updates on the situation.

He said the 77 and 76 cases recorded in previous years, 47 cases of kidnappings were reported this year [2019], and indicated that 21 of the cases were proved to be false and 17 rescued.

He said the government would not relent until all the missing children were rescued.

Between August and December 2018, three cases of alleged kidnapping were reported in the Western Region and the victims are yet to be found.

In all the three cases, the police established that the alleged kidnapper [Samuel Udeotuk-Wils] struck acquaintances with the victims for some time before moving into action.

The police said the kidnapper contacted the victims several times through the mobile phone.

The first victim, Priscilla Blessing Bentum, 21, was kidnapped at Kansaworodo on August 17, 2018; while the second victim, Ruth Love Quayson, 18, was kidnapped at the Butumegyabu Junction, popularly known as the BU Junction in Takoradi, on December 4, last year, with the third, Priscilla Mantebea Koranchie,15, a first-year student of the Sekondi College (SEKCO) who resided at West Fijai with her parents, she went missing at a location near the Nkroful Junction on December 4, last year.

A day after the third victim went missing, the police, through intensive investigations, arrested Samuel Udoetuk Wills, a 28-year-old Nigerian national, from his hideout on the outskirts of Kansaworodo.

He has since been in custody after making some appearances in court.

Speaking to a gathering at Bawdie-Dompim in the Amenfi West District recently as part of his tour of the Western Region, President Nana Addo Dankwa Akufo-Addo said the government was not sleeping over the missing Takoradi girls.

He assured the affected families and the nation that everything would be done to rescue them, and indicated that the security agencies were working with all seriousness, albeit on the quiet, and expressed optimism that the efforts would pay off.

“We are not sleeping on the three missing young women. It is important to note that those involved are wicked and crafty people and the team is working to rescue them,” the President said.