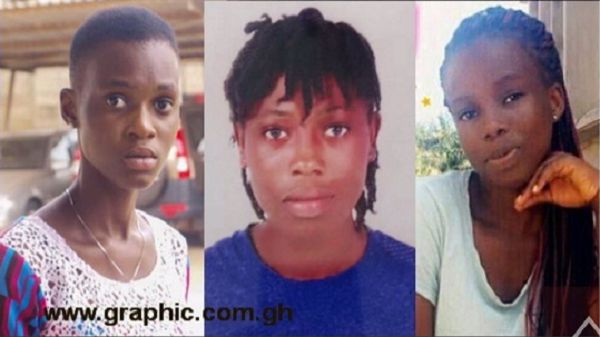 A team of investigators from the United States of America (USA) and the United Kingdom (UK) are in the country, assisting the Ghana Police Service to search for the three girls kidnapped in the Sekondi/Takoradi metropolis between August and December last year

comes in the wake of mounting pressure on the Criminal Investigations Department (CID) of the Police Service to intensify investigations into the kidnapping to rescue the victims.

Last week, some family members of the victims called on the police to show proof that the girls were alive.

The Director-General of the CID, Deputy Commissioner of Police (DCOP) Mrs Maame Tiwaa Addo-Danquah, announced this at separate meetings with the families of the three girls and assured them of the commitment of the Police Administration to find the girls.

She urged the families and the public to cooperate with the police, saying the team of investigators was seriously working to track the girls, adding: “It is not all leads picked during the investigations that can be made public.”

She said rescuing the victims was not an issue for the families alone but responsibility for the entire nation.

The CID boss interacted with the families of the victims in their homes, during which she conveyed to them the sympathies of the IGP and the Police Administration.

The families expressed gratitude to the police for the constant interaction with them, led by the Western Regional Police Commander.

“This gives us the confidence that the police attach great importance to the search for the girls,” the mother of one of the girls said.

Meanwhile, there is paranoia across Sekondi/Takoradi over the issue of kidnapping, as the least attempt by men to engage with women, especially where there are no third parties, causes the women to shout and scream for help.

Strangers who ask for directions to places are assumed to be among kidnappers looking for victims.

The police have so far documented cases of lynching of innocent men and false alarms on kidnapping in some communities.

For instance, the timely intervention of the police early yesterday prevented a young man in his mid-20s from being lynched at Kojokrom, a suburb of Sekondi, after he was accused of kidnapping a lady.

When some family members and people from the community charged up and went to the man’s residence, the lady was brushing his teeth, with a piece of cloth around her.

Before the mob got to the residence, somebody had called the police, who arrived in time to save the situation and took custody of the young man and his girlfriend to safety.

According to the police, the two had been dating for some time and at the blind side of their families.

Due to the panic situation in the region, particularly in Sekondi-Takoradi, some passengers are abandoning taxi cabs for commercial mini-buses () for fear of being kidnapped.

Some Nigerians in the city are also living in fear, after being linked with the kidnapping of the three missing girls.

The police said even though they had increased patrols, members of the public who found suspicious persons around them raised alarm, accusing people they did not know of being kidnappers and those missing as kidnapped.

The Western Regional Police Command said almost all district and divisional commands were inundated with cases of suspected kidnapping, even in situations where young ladies sneaked out of their homes to visit male friends without permission.

So far, five persons have been arrested, two of them for having in their custody minors as girlfriends and the rest for assault.

In Takoradi, a lady who accepted a lift from a private vehicle driver to the city centre claimed she was being kidnapped because the driver was driving too fast and ordered him to stop.

After getting down, she called a radio station and claimed she had almost been kidnapped.

Again, a woman who claimed she was released after being kidnapped in Takoradi for ritual purposes had her husband send a voice recording to a Takoradi-based radio station to narrate the ordeal of the wife.

At Elubo, a pastor’s 17-year-old daughter who left home on January 20, to her boyfriend in another part of the town without the consent of her parents was reported as having been kidnapped to the police until she was seen in town.

The police, however, picked up the girl’s boyfriend, Kasim Suleman, 26, and charged him with of an underage girl.

The Kwesimintsim District Police Command rescued three young men in a taxi cab from being lynched after they were accused by some young ladies at Ajoa, a community near Kwesimintsim, for attempting to kidnap them.

The Regional Police Commander, Deputy Commissioner of Police (DCOP) Mr Redeemer Vincent Dedjoe, told the Daily Graphic that the situation was not the best and that the command had put measures in place, as it took every report seriously.

“We have intensified patrols and if anybody suspects or sees some strangers in his community, he should report to the police. We have patrol teams that will be deployed immediately.

“If the community apprehends any suspect too, it should hand him over to the police and not take the law into its own hands,” DCOP Dedjoe said, warning that “if people can just shout and point at people, accusing them of kidnapping, then the entire society will not be safe”.

The police commander appealed to the media not to be in a rush to be the first to report, saying: “You should try and verify; we are here to clarify issues to ensure public safety.”