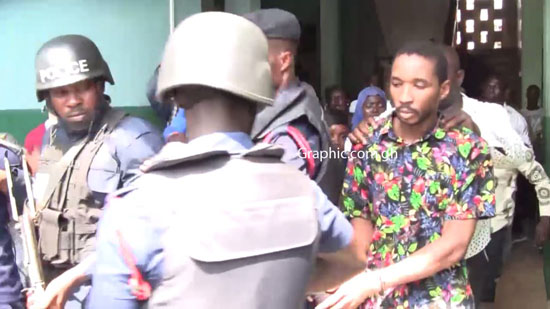 There was drama at the Takoradi Circuit Court on Wednesday when a mother of one of the three missing Takoradi girls attacked one of the suspects, Samuel Udoetuk Wills.

Comfort Arhin, mother of Ruthlove Quayson, enraged by the not guilty plea of the suspect could not help but slap the suspect when he was being ushered out of the court.

Sam Udoetuk Wills and John Oji have been charged with six counts of conspiracy to commit crime to wit kidnapping and kidnapping.

At Wednesday's proceedings, Chief State Attorney , Patience Klinogo, revealed that the accused persons used coded language on kidnapping and other crimes in their conversations on social media networking platform, Facebook.

She told the court that the interaction of the accused persons was detected on the mobile phone of the second accused, John Oji, after police arrested him on June 4, 2019, at Aflao around the Ghana-Togo border.