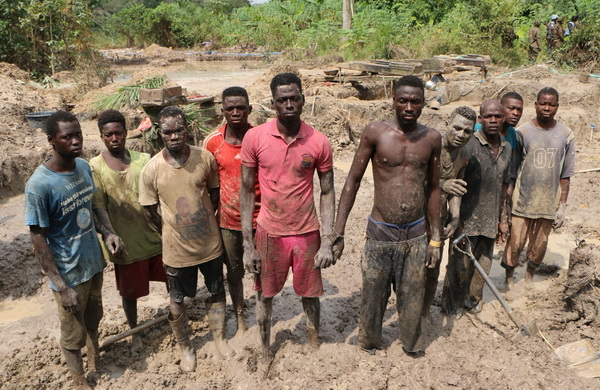 The joint-taskforce against illegal mining in Ghana, Operation Vanguard has arrested 15 galamsayers operating Changfan (dredging platforms) on the Bia River in the Western Region.

The arrests were made during operations conducted on Monday 22 and Wednesday 24 January, 2018, mostly along the Bia River in the general area of Sui-Aboi and Chairmankrom (Fawohobo Yesu) in the Suaman District.

A release by the Task Force said 16 Changfans were immobilized along the Bia River, while the suspects and items seized were sent to the Dadieso Police Station for further investigations and subsequent prosecution.

It said Operation Vanguard was conducting operations in the Suaman District and specifically paying attention to the Bia River and other rivers in the country such as Ankobra, Prah, Offin and Birim.

The Bia is situated primarily in Ghana and flows through Ghana and the Ivory Coast, emptying into Aby Lagoon. A hydroelectric dam was built across the Bia at Ayamé in 1959, causing the formation of Lake Ayamé in the Ivory Coast.

In March 2017, a news item in an Ivorian newspaper headlined, “The 'gold rush' polluting Cote d’Ivoire’s drinking water” reported how galamsey activities in Ghana were impacting on water supply in that country.

The Bia River was labeled in the report as a main source of water for the residents of Bianouan in Eastern Cote d’Ivoire. “They drink the river water, and they bathe, fish and wash their clothes in it. But all that changed about a month ago, when the river turned a murky brown. Observers suspect that illegal gold mining is behind the contamination,” the news article said.

The inhabitants in Bianouan could no longer use the river for drinking or washing, because it was so polluted, and there was a cessation of fishing. The news article blamed illegal mining activities in Ghana for the pollution of the water bodies.

In April last year the Minister of Environment, Science and Innovation, Professor Kwabena Frimpong Boateng made the revelation during the launch of a Media Coalition Against the Galamsey menace in the country.

According to the Minister, he was confronted with the situation while attending a conference in that country.

“Checks by Operation Vanguard at Dadieso indicate that the colouration of the river has changed and both inhabitants in Ghana and Ivory Coast are commending the Task Force.

“There is therefore the need for us to do everything possible within our means to support the government to curb this menace in order to preserve the cordial relationship between the two countries.

“The fight against galamsey continues unabated and Operation Vanguard would want to use this opportunity to entreat all well-meaning Ghanaians to feed the Task Force with Information on illegal mining activities in their general areas of residence. We need to fight together to ensure a safe Ghana tomorrow.”