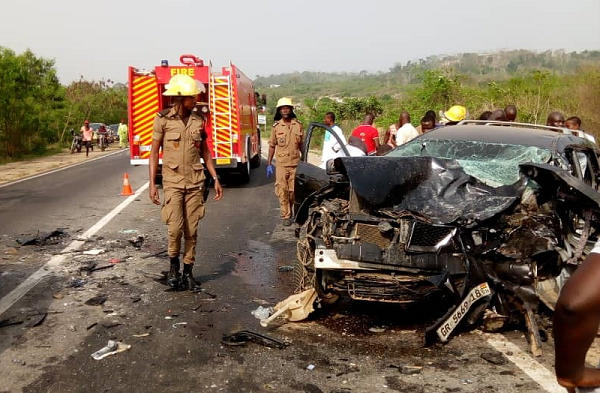 The National Road Safety Authority (NRSA) has stepped up the Stay Alive campaign ahead of the Easter festivities, with a call on all road users to strictly adhere to road traffic regulations during the festive season.

As part of the campaign, the authority has rallied other stakeholders, including the Motor Traffic and Transport Department (MTTD) of the Ghana Police Service and the COVID-19 Trust Fund to ramp up public education, sensitisation and enforcement of the road traffic regulations with the view to reverse the high road crashes associated with Easter.

With the Easter festivities starting this week, the NRSA has also announced an emergency code number,194, for members of the public to send texts, videos and pictures of bad driver behaviour on the road to the Road Safety Information Centre for prompt action to be taken.

The acting Director-General of the NRSA, David Osafo Adonteng, who disclosed this to the Daily Graphic yesterday, said the initiative was part of measures that were being rolled out to ensure the safety of road users during the Easter season.

He said the move was meant to consolidate the gains that had been made in reducing figures of road crashes for the first quarter of the year.

Mr Adonteng explained that 734 people perished in road crashes in the first quarter of the year as against 771 for the same period last year.

He observed that the reduction in the figures came by dint of hard work by the NRSA in collaboration with other stakeholders, especially through the Stay Alive campaign.

"These two figures show that there is a reduction in the number of deaths within the same period last year, and this is something good for all of us. However, it is not good enough. We want to consolidate the gains and reduce the numbers to the minimum level possible," he stressed.

Mr Adonteng said a trend analysis of road crashes and deaths showed that more accidents and fatalities occurred during Easter every year because of the busy nature of roads during that period.

As a consequence, he said, more police officers and NRSA staff would be deployed to notable highways and roads that had high human traffic during Easter.

He identified the Accra-Kumasi road, Kwahu road and roads leading to the Volta Region as the main areas of focus as far as road crashes during Easter were concerned.

"For the past two years, Easter festivities have been affected by COVID-19 so we anticipate that with the restrictions lifted this year, many people will troop to Kwahu, the Volta Region and other notable places.

"Also, churches will be having programmes such as conventions and picnics, which will require people to travel to other places. We want to ensure that the increased use of the road does not lead to many crashes and deaths," he said.