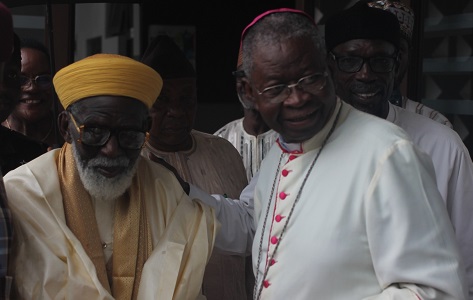 A national dialogue between Muslim and Catholic leaders has been held in Accra to deepen religious tolerance to safeguard the prevailing peace and security in the country.

It forms part of efforts to ensure that the country remains an oasis of peace in the midst of disturbances occurring in some neighbouring countries in the West African sub-region.

The maiden dialogue, which was held yesterday [May 26, 2022], was aimed at deepening the pleasant relationship that exists between Christians and Muslims and build upon the collaboration for the common good of the country.

Among participants were Islamic clerics, the Head of the Ahmadiyya Muslim Mission in Ghana, Alhaji Maulvi Mohammed Bin Salih, Catholic priests, including the President of the Ghana Catholic Bishops Conference (GCBC), the Most Rev. Philip Naameh, and his vice, the Most Rev. Charles Palmer-Buckle.

The National Chief Imam, Sheikh Usmanu Nuhu Sharubutu, who co-chaired the event with the Most Rev. Naameh, said: “For us to attain progress, this kind of dialogue will help prevent evil that will come to us and also attract the good for our country.”

He described the peace being enjoyed in the country as a favour of God and said it behoved every citizen, irrespective of his or her religious inclination, to work towards sustaining the gains made so far by living peacefully with one another.

According to Sheikh Sharubutu, tolerating one another was one of the ways of preventing “evil in our respective communities for accelerated development”.

The Chief Imam, who spoke through his spokesperson, Sheikh Armiyawo Shaibu, further said it was important for the people to appreciate the fact that while Muslims could go to the mosque and pray peacefully, Christians could also go to church and worship without any disturbances.

He expressed appreciation for the initiative and urged the two parties to ensure continuity of the dialogue in the coming years.

Giving historical antecedents of the existing relationship between Catholics and Muslims, Archbishop Naameh, who is also the Metropolitan Archbishop of the Tamale Archdiocese, said the church had always believed in dialogue and recalled its various commitments not to disrespect other religions.

He thanked the Chief Imam for gracing the occasion and also supporting various peace initiatives over the years.

The Executive Director of the Sanneh Institute, a Christian research body, Prof. John Azumah, and the Chief Imam of the Madina West Area, Sheikh Salaman Mohammed Alhassan, made presentations on Christian and Muslim perspectives on the topic: “The need for dialogue in light of interfaith diversity”.

Both opined that dialogue was necessary for the sustenance of peace in the country.

For his part, the Minister of Chieftaincy and Religious Affairs, Kofi Dzamesi, in a speech read on his behalf by the Chief Director of the ministry, Benjamin Afful, described the dialogue as beneficial to the nation.