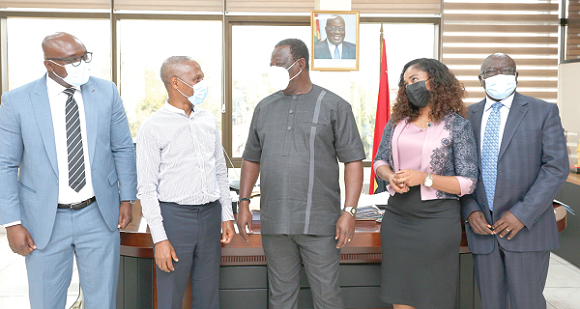 The Minister of Roads and Highways, Mr Kwesi Amoako-Atta, has asked the security agencies to speed up investigations into allegations of extortion at axle load weigh stations across the country.

This follows the arrest of the Director of Axle Load at the Ghana Highway Authority (GHA) and some officials manning 18 stations from Tema in the Greater Accra Region to Bamboi in the Savanna Region.

Speaking during a courtesy call on him by the Managing Director of Unilever Ghana PLC, Mr George Owusu-Ansah, in Accra yesterday, the minister indicated that some officials were turning the facilities into money-making ventures, while neglecting the core duty of clamping down on cargo overloads which put unnecessary pressure on the country's road infrastructure.

The visit by the Unilever team was to congratulate the minister, a former employee of the company, on being retained for the second term.

It was also to discuss issues of road safety and how the company could assist the ministry in its safety sensitisation and training programmes.

Mr Amoako-Atta lamented what he said was the flouting of the axle limit regime by road users, particularly bulk cargo vehicles, with the aid of officials who were to rather discourage the practice.

Trucks that flout the axle load limit pay penalties from GH¢5,000 upwards for the excess cargo.

The minister, however, said he had seen some officials allegedly negotiating with companies to bypass the system, so that funds which were expected to go to the state went into individual pockets.

He cited recent reports suggesting that an estimated GH¢370,000 was lost daily at nine axle load weigh stations across the country as a result of alleged collusion by officials and some private agents.

He expressed worry over the continuous disregard for road safety by the motoring public.

He announced that a sod-cutting ceremony would be performed next month to start the reconstruction of the Tema-Accra Motorway, in line with the government's objective to improve the country's road infrastructure.

"Regrettably, while the government is making efforts to improve the road infrastructure to make driving safe and convenient, many motorists continue to disregard road safety protocols, thereby increasing the incidence of fatalities on our roads," he said.

The minister commended the management of Unilever for the gains they had made which had ensured that the company continued to create opportunities by way of employment for Ghanaians.

Mr Owusu-Ansah, for his part, said Mr Amoako-Atta, who previously worked in the area of brands management and logistics and also as head of the Legal Department prior to joining politics, was an exemplary worker who had an unblemished record at the company.

"His sense of responsibility, discipline and focus saw Unilever folding up its Legal Department and handing the legal schedule to his law firm in order for us not to sever our relationship with him," he said.

Unilever, the MD noted, had a keen interest in the quality of the country's road infrastructure and associated safety issues.

"We dispatch, on a daily basis, 50 trucks of products across the country and safety is key to our operations, hence our desire to be part of any such initiative, be it driver training, public education and so on, that the ministry may wish to engage in," Mr Owusu-Ansah said.