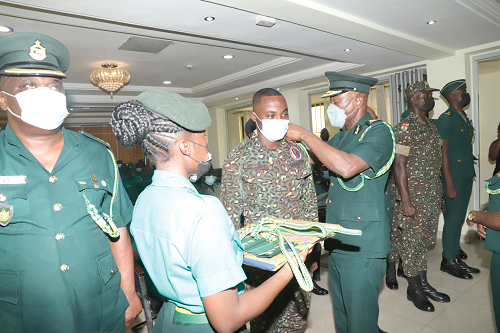 Mr Kwame Asuah Takyi (3rd right), Comptroller-General of the Ghana Immigration Service, decorating one of the officers with his new rank during the ceremony. Picture: EDNA SALVO-KOTEY

The Ghana Immigration Service (GIS) has honoured 18 officers of the service for exhibiting professionalism and bravery in the discharge of their duties.

Six of them intercepted 1,550 slabs of marijuana at Klave, a border community, along an unapproved route between the Ghana-Togo border.

Similarly, eight officers who were at the Wli Border Post intercepted 608 slabs of marijuana along an unapproved route within the Wli-Todzi Border community along the Ghana-Togo border.

Again, four officers on duty at the Kandiga inland checkpoint on the Bolgatanga-Navrongo Highway showed commitment to duty by remaining at post during a heavy downpour to ensure that miscreants did not enter the country illegally.

By virtue of their good deeds, the 18 GIS officers received special promotion to their respective next ranks, in accordance with Immigration Service Regulations, 2016 (L.I. 2245).

At a ceremony at the GIS Headquarters in Accra yesterday, the Comptroller-General of Immigration, Mr Kwame Asuah Takyi, noted that the commendable act depicted the values of the service.

He, therefore, urged other officers to emulate such deeds to help enhance security at the frontiers against the threats of terrorism and cross-border crimes.

Mr Takyi noted that the contributions of the GIS to national development and the maintenance of internal security were not in doubt, and stressed that no officer would be allowed to destroy such efforts through his or her selfish interest.

“Let me reiterate here and now that the management of the service will not shield officers who misconduct themselves and compromise security at the borders.

“We hear some officers collude with people with illegal substances and others to enter, in spite of the closure of the borders. We won’t shield you if you are caught; we shall deal with you in accordance with the laws governing the service,” Mr Takyi stressed.

He further urged the officers to take advantage of the newly commissioned COVID-19 Testing Facility for the GIS to help curtail the spread of the virus and create a congenial public health safety.

That, he said, would help support the national effort at controlling the spread of the virus.