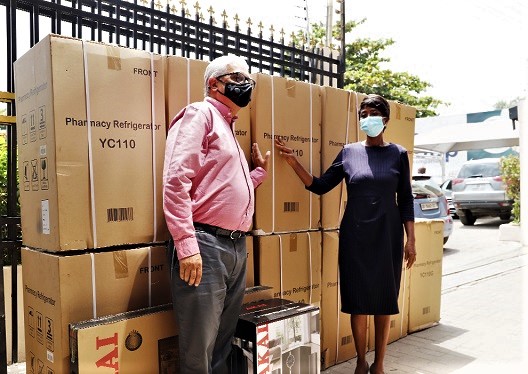 The Melcom Care Foundation, the philanthropic arm of the Melcom Group of Companies, has presented 11 pharmacy refrigerators to 11 health facilities to augment their service delivery.

The refrigerators are for the safe storage of pharmaceuticals, including medications and vaccines, at regulated temperatures.

The beneficiary health facilities include the University of Ghana Medical Centre, the 37 Military Hospital, the Mamobi General Hospital and the Ashaiman Polyclinic.

At a ceremony, the Director of Brand Management of Melcom, Mrs Sonya Sadhwani; the Joint Group Managing Directors, Mr Manesh Melwani and Mr Ramesh Sadhwani, as well as the Group General Manager, Mr Francis Sam, took turns to present the fridges to various representatives of the beneficiary hospitals.

The Director of Communications of the Melcom Group, Mr Godwin Avenorgbor, said the gesture formed part of activities to honour the memory of the late Chairman of the group, Mr Bhagwan Khubchandani.

“So the directors of the group have decided to continue that initiative by donating much needed medical refrigerators to support the beneficiary medical centres,” he stated.

Mr Avenorgbor added that the donation was also a follow-up support for a successful nationwide blood donation exercise organised recently in conjunction with the National Blood Service.

At the same event, the Melcom Care Foundation made a donation to support the 2021 edition of the Institute of Financial and Economic Journalists (IFEJ) Awards slated for Friday.

The foundation also offered to support a health worker, Ms Hannah Adei-Mensah, to register for and participate in an online Public Health Conference by the Magnus Group LLC in Chicago, United States of America.

The foundation further recognised a lecturer at the Ghana Institute of Journalism, Mr Carlton Cofie, for being loyal to Melcom.

Mr Cofie revealed that he bought a grandfather clock from Melcom 29 years ago, which was still functioning without fault and without servicing.

In recognition of his loyalty, the company presented him with a gift voucher with an undisclosed amount of money.

The Administrator of the Mamobi General Hospital, Ms Hellen Tettey, expressed appreciation to the Melcom Group for the gesture.