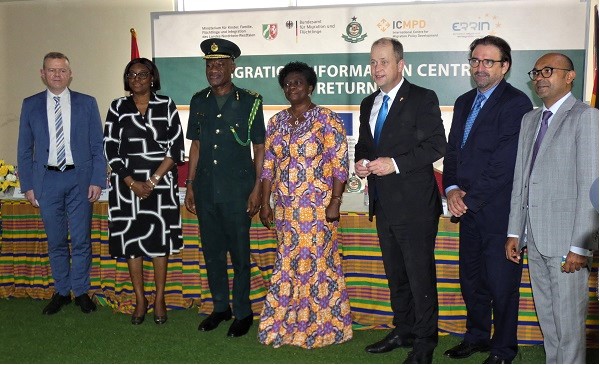 A migration information centre for returnees has been established at the Kotoka International Airport (KIA) to provide first-hand information on opportunities, government programmes and services available in Ghana.

The centre will also provide both voluntarily and forced returnees advice on available reintegration initiatives and livelihood support programmes by the government and other supporting agencies for their re-establishment process.

The centre is part of a two-phase project with the objective to increase the Ghanaian administration’s ownership in the coordination of reception of returnees, as well as offer quality reintegration services to returning migrants.

The second phase will focus on capacity building of officers to provide the needed services.

Some officers have already been trained in counselling and other areas to effectively discharge their duties.

At the opening of the centre, the Minister for the Interior, Mr Ambrose Dery, in a speech read on his behalf by the Chief Director of the ministry, Mrs Adelaide Annor-Kumi, indicated that the government considered migration as a security issue, stressing, however, that it must not be addressed using only security measures.

The government and other stakeholders, the minister said, were mindful of the importance of addressing the issues that influenced Ghanaians to illegally migrate to Europe.

He mentioned poverty, climate change, misinformation regarding migration, among others as some of the factors that influenced illegal migration that needed to be tackled.

He noted that it had taken a substantial investment from the European Return and Reintegration Network (ERRIN), the State of North Rhine-Westphalia (Germany), the International Centre for Migration Policy Development (ICMPD) and the Ghana Immigration Service (GIS) to have the centre established.

The project, he noted, had become a reality because Ghana remained one of the most important West African countries regarding migration cooperation with the European Union (EU).

He said many Ghanaians in Europe chose Germany, particularly the region of North Rhine-Westphalia, as their main destination.

As a result, the State of North Rhine-Westphalia and the government of Ghana had established a collaborative dialogue on migration management issues, putting dignified return and sustainable reintegration as one of the priority items on the agenda under the ERRIN project.

"Our efforts here today also coincide with the efforts of reducing illegal movement of Ghanaians to European countries," the minister said, adding that the government and relevant agencies had emphasised the need to adopt a comprehensive approach in the fight against illegal migration.

Mr Dery said most returnees who were deported travelled without genuine documents and through inappropriate routes.

The government, he said, was ready to work with relevant stakeholders to reduce illegal migration.

He commended the Comptroller General of Immigration, Mr Kwame Asuah Takyi, for initiating the centre first as a desk at the Airport Regional Command.

He added that his ministry was ready to support the coordination of the returnees in the areas of assistance upon arrival, health and better reintegration.

Mr Asuah Takyi said the initiative had since 2019 assisted over 1,000 migrant returnees to the country, with over 600 of them benefiting from the reintegration support.