Let’s tolerate one another to sustain peace - NPC 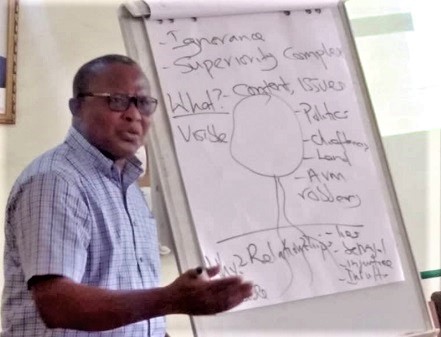 The Executive Secretary of the Northern Regional branch of the National Peace Council (NPC), Rev. Father Thaddeus Kuusah, has entreated the various ethnic groups and traditional authorities to tolerate one another to promote peaceful co-existence for national development.

According to him, some of the conflicts being witnessed in the country were as a result of the disregard for the cultural diversity of individuals and groups, saying the only way to ensure national cohesion was to respect one another’s views and beliefs.

"We need to stop looking down on the cultures of others; every ethnic group values its culture, and so looking down on others’ culture can lead to conflicts,’’ he added.

Rev. Father Kuusah was speaking at a day’s peace-building and conflict resolution workshop for assembly members in Karaga in the Northern Region last Wednesday.

It was organised by the Karaga Peace Ambassadors, a civil society organisation, in collaboration with the STAR Ghana Foundation.

The training formed part of a conflict, security and stability fund (CSSF) project being implemented in northern Ghana and funded by the Foreign, Commonwealth and Development Office (FCDO) of the UK.

For some time now, the Karaga District has recorded a number of disturbances arising from farmer-herder conflicts, leading to the loss of lives and properties.

He also advised residents of the district to co-exist peacefully and use lawful mechanisms to settle their differences, instead of resorting to violence.

The Project Officer of the CSSF, Mr Aaron Atimpe, said the training was aimed at building the capacity of the assembly members for them to collaborate effectively with relevant stakeholders to facilitate the resolution of conflicts in the area.

"Under the CSSF, 13 communities in three districts in northern Ghana are being supported to implement community-led approaches to address identified conflict and insecurity issues and also strengthen stakeholder action at the local level towards peace and security," he said.

For his part, the Coordinator of the Karaga Peace Ambassadors, Mr Baba Kamaldeen, appealed to the people to eschew violence and embrace peace to promote development.