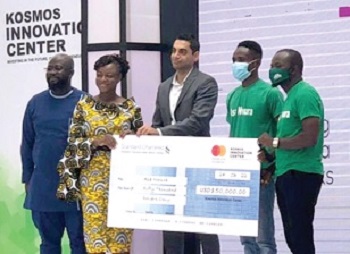 Rosy Fynn (2nd from left), Country Head of the Mastercard Foundation, presenting a dummy cheque to the Asa Nwura team. With them is Benjamin Gyan-Kess (left), Executive Director of the Kosmos Innovation Centre Follow @Graphicgh

A foundation that supports young people in agribusiness, the Kosmos Innovation Centre (KIC), has awarded a grant of $250,000 (about GH¢1.9 million) to eight agricultural start-ups to enable them to expand their operations.

The KIC, the social investment arm of the oil and gas producer, Kosmos Energy, offered the support in partnership with the MasterCard Foundation, which helps young businesses, and Cargill, a cocoa processing company based in Tema.

The eight firms were selected from 13 finalists drawn from about 400 applicants who took part in the KIC’s flagship support programme, the AgriTech Pro 2021 Challenge.

The contest, which started in August last year, is the sixth edition in a series which began in 2016 to make transformational interventions in sectors of the economy, beginning with agriculture.

Three of the winning start-ups — FarmAsyst, Agrimercarb and Asa Nwura — received $50,000 each as grant, sponsored by the MasterCard Foundation, with Farm Estates taking home $40,000, while BOOD and Makufoods won $20,000 each for investment in their businesses from the KIC.

The teams will now move into the incubation stage, which involves more focused business training, specialised coaching and mentorship, networking, a physical workspace and access to technical expertise.

The Board Chairman of the KIC, Mr Joe Mensah, said although Ghana is an agricultural country, over the years agricultural output had decreased, hence the need to “get back up again”.

“Everybody eats, so there will always be the need for food, and if you are in that business, chances are you will have a business for life,” he said.

Mr Mensah, who is also the Senior Vice-President and Head of the Ghana Business Unit of Kosmos Energy, added that the aging population in the agricultural sector would negatively impact the country if measures were not put in place to fill the void, such as using innovative technology to attract the youth to the sector.

The Executive Director of the KIC, Mr Benjamin Gyan-Kesse, said the centre would continue to groom young entrepreneurs and help them bring produce and business to the marketplace.

He added that the initiative also focused on supporting small and medium enterprises (SMEs) in agriculture by connecting them to funding, as well as building their capacity.

“Basically, at the KIC we aim at changing the perception young people have about agriculture. We are using agriculture to create jobs for the youth of this country,” he added.

The team lead of FarmAsyst, Wisdom Zetor, told the Daily Graphic that winning the cash prize was a dream come true for him and his teammates, saying they had taken part in previous editions but never made it to the finals.

He expressed gratitude to the KIC and the MasterCard Foundation for their support, and said the team was now on a mission to prove itself worthy of all the support given to it.

“Now that the challenge has ended, we ought to prove to the judges that they did not make a mistake investing in FarmAsyst. We are going to work hard to ensure that we make what they saw in us come true,” Mr Zetor said.