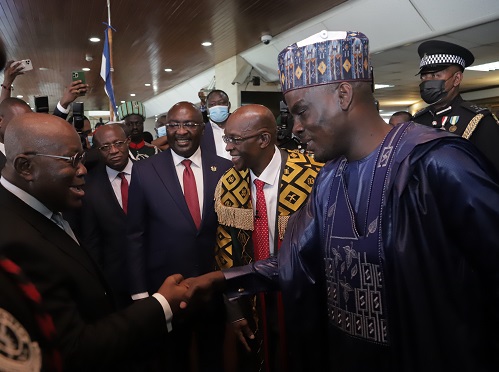 President Nana Addo Dankwa Akufo-Addo has called on all Ghanaians to “pull and push together” to overcome the economic challenges facing the country.

“There are many problems that we have to overcome to get back to where we ought to be. I need your support. No President, no Parliament, no government can undertake this task all by themselves. We need all Ghanaians to pull and push together,” he added.

He said the road to recovery from the economic challenges would be hard and long, but the job could be done with the support of all.

President Akufo-Addo made the call when he delivered a message on the State of the Nation to Parliament in Accra on March 30, 2022.

He said the government had accepted the challenges and was taking the required difficult decisions that would get the country out of them, saying: “If anyone ever had any doubt about the need to be self-reliant, the point has now been forcibly drilled home to us. The pursuit of the Ghana Beyond Aid agenda is even more compelling now.”

President Akufo-Addo also expressed confidence in the Ghanaian to build the desired future and recounted the spirit of togetherness and the willingness to help one another when COVID-19 struck.

“We looked out for one another. I saw the sense of enterprise and innovation in the Ghanaian. I saw our manufacturers quickly adapt their plants to produce sanitiser and our tailors equally quickly display the innovation they have always been known for by turning face masks into fashion items,” he recounted.

The President, who was in a snow-white shirt, a blue black suit and a tie to match, arrived at the precincts of Parliament at about 10:10 a.m.

He was welcomed and ushered into the Chamber by the Speaker, Mr Kingsford Alban Sumana Bagbin, in the company of the Majority and Minority leaders of the House.

It was a generally cordial atmosphere with the Majority side intermittently cheering and hailing the President’s speech, while the Minority, which had walked out of th House just the previous day, looked on.

This year’s ceremony would be remembered as one of the historic occasions as the Majority side heralded the message of President Akufo-Addo with a Happy Birthday song in honour. The President had celebrated his birthday last Tuesday.

Some members of the Diplomatic Corps at the SONA. Picture: SAMUEL TEI ADANO

President Akufo-Addo noted that in dealing with COVID-19, the government worked to save lives and fared much better than it had feared and the experts had predicted, but the consequences of lockdowns, border and business closures and unplanned expenditures had combined to have a devastating impact on the economy.

The unplanned expenditures included the recruitment of 58,191 healthcare professionals and the payment of extra incentives to frontline health workers.

He explained that the government incurred an unbudgeted GH¢1.9 billion debt to ensure that schoolchildren and teachers returned to and stayed in school safely.

He added that the government provided nearly five million households and 10 million people with electricity and water subsidies at the time the two utilities were most needed.

“In all, data from the Ministry of Finance tell us that an amount of GH¢17.7 billion (or 4.6 per cent of Gross Domestic Product (GDP) has been spent on containing the pandemic since 2020,” the President added.

He recounted how the economy was on the path to great success when COVID-19 struck, with even the big and established economies of the world being knocked off their planned trajectory.

“Countries where budget deficits were unknown and prohibited by law suddenly had to accept huge deficits to underwrite social cohesion,” he noted.

The economic devastation of COVID-19 had, since the beginning of the year, been further aggravated by the Russian invasion of Ukraine, which had worsened the economic outlook of the entire world, he added.

He said the consequences of the Ukraine-Russia tussle were being felt in rising living costs at the markets and at fuel stations.

Explaining the impact, he said 30 per cent of wheat flour and fertiliser imports came from Russia, 60 per cent of iron rods and other metal sheets were imported from Ukraine and almost 20 per cent of the country’s manganese was shipped to Ukraine.

“The bombs may be dropping on cities half a world away, but they are hitting our pockets here in Ghana. Even so, we have managed to ensure that fuel supplies have not been disrupted, unlike in many other parts of the world,” the President said.

President Akufo-Addo again recounted the measures announced by the Finance Minister to deal with the economic and fiscal difficulties the country faced to bring relief and restore the economy onto the path of growth.

“The measures that have been announced by the Minister of Finance are meant to demonstrate that we are aware that we are in difficult times, and that we are addressing the situation.

“The belt-tightening measures being set for members of the Executive have been elaborated within this context,” he stated.

The President did not turn a blind eye to the general sense of anxiety in the country, a reality he acknowledged at the beginning of his message.

“From the focused point as head of government, from the enviable position of a husband, father and grandfather, I know that there is a general sense of anxiety in our nation at the moment,” he said.

He said he was aware that the anxiety was about the economy, the cost of living, income levels, jobs for young people and even about issues on which all thought they could have achieved a national consensus.

“When some among us are raising questions about the certainties on which we are building the state, it is not surprising that worries about the stability of the government would become cause for heightened tension in the nation,” he noted.

The President indicated that two years ago, the country was in lockdown and in the midst of the unknown, which took a while before the pandemic even got a name, and the only certainty about it was that nobody knew very much about it.

Touching on the project to construct various types of hospitals across the country, the Agenda 111, President Akufo-Addo announced that, like all major construction projects, it was evident that the initial schedule for the completion of the 111 hospitals “was overly ambitious”.

He explained that identifying suitable sites around the country turned out to be even more problematic than had been anticipated.

“I am able to say that a great deal of the preparatory work has now been completed and work has started at 87 of the 111 sites. I have been assured that preliminary work on the remaining 24 sites is ongoing,” the President said and gave an assurance that his intention was to inaugurate all the projects before he left office on January 7, 2025.