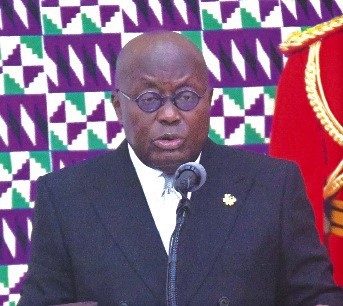 President Nana Addo Dankwa Akufo-Addo has hailed the two major political parties, the New Patriotic Party (NPP) and the National Democratic Congress (NDC), for the positive contributions they have made to the development of multi-party democracy in the Fourth Republic.

“It is up to us to find a way to accommodate each other and our differences to make things work for the benefit of the Ghanaian people,” he said.

Delivering the message on the State of the Nation in Parliament on March 30, 2022, the President said there was still work to be done on building the institutions of the country, adding that Ghana’s democracy was worth fighting for.

Nevertheless, he decried attempts by certain elements to advocate coups d’état as the answer to the problems of the nation.

“Mr Speaker, it might also well be that coups d’état have re-entered our discourse because of the turmoil in our neighbourhood.

“The West African subregion is suddenly back in international headline news for all the wrong reasons — we are back again as the region of political instability and the place for coups,” he stated.

The President said Ghana knew the cost of instability, as it resulted in the exodus of its artisans and professionals and also depleted the classrooms of teachers.

He pointed out that the country needed to use its chairmanship of ECOWAS, membership of the African Union, as well as non-permanent membership of the UN Security Council, to work towards achieving the goals of securing the nation.

President Akufo-Addo said the five years of his administration had seen the construction and upgrading of more roads than at any other equivalent period under any government in the history of Ghana.

He said some 10,875 kilometres of new roads had been constructed in those five years and proudly mentioned the Tamale Interchange, the first such project in the northern part of the country, which he had inaugurated last Tuesday, as one of such major road projects.

“I considered it to be a most satisfying birthday present,” he said of the Tamale Interchange, adding: “We intend to continue with the building of roads round the country to accelerate the opening up of our country.”

President Akufo-Addo said despite worldwide upheavals in the energy sector, and in spite of the huge legacy debts his government inherited, it had almost completed the process of restructuring the debts to reduce their crippling effect on the public expenditure.

He noted that with the introduction of more bulk supply points in areas such as Kasoa and Pokuase, power transmission had improved tremendously in the south-western and north-western parts of the Greater Accra Region.

The President said under the National Electrification Scheme, a total of 279 communities had been connected to the national grid, which had increased the national electricity access rate from 85.17 per cent in 2020 to 87.03 per cent as of January 2022.

He announced that 487 more communities were at various stages of connection and completion, and that the government was on course to achieve the ambition of universal access to electricity by the end of his term as President.

While stating that the production of 1,047,385 tonnes of cocoa was the highest ever recorded in the country’s history, the President said with the introduction of non-adjustable electronic weighing scales for the purchase of the produce, purchasing clerks could not tamper with the scales to short-change farmers.

This technology, he explained, would mark the end of one of the main sources of distrust between cocoa farmers and officialdom, pointing out that cocoa farmers were being cheated by tampering with weighing machines.

Touching on the Ghana Card, which has been integrated into the everyday lives of the people, the President said: “Never again will it be that someone born in this country will live a full life, die and be buried without any record of his or her existence.”

He announced that operations of the Births and Deaths Registry were finally being digitalised to make sure that documents issued from that department were accorded the respect they should have, adding that every child born in the country would be registered, and the date of birth registered would remain his or her date of birth throughout his or her life.

President Akufo-Addo spoke highly of the great improvement and change of image the Ghana Police Service was undergoing.

He said during times of anxiety, the country required a responsive police service to boost the confidence of the population and it was good to see the police rise up to the challenge.

He urged Ghanaians to cooperate with the police to perform their duties to enable all to go about their lives in peace.

President Akufo-Addo noted that the government was providing the much needed modern equipment for the service and tackling its accommodation needs, and mentioned the 320 housing units being constructed at the National Police Training School as an example.

He announced that work was also ongoing on the construction of a huge barracks complex at Kwabenya to replace the one adjacent the DVLA Office at the 37 Military Hospital, where conditions of living were poor.

He said with the implementation of a number of operational and personnel welfare interventions, the morale of policemen had received a considerable boost, and today public-focused interventions, instituted by the Inspector General of Police (IGP), had resulted in a better police-public relationship.

“The Police Service is gradually regaining the trust and confidence of the public, under the leadership of its new IGP,” he added.