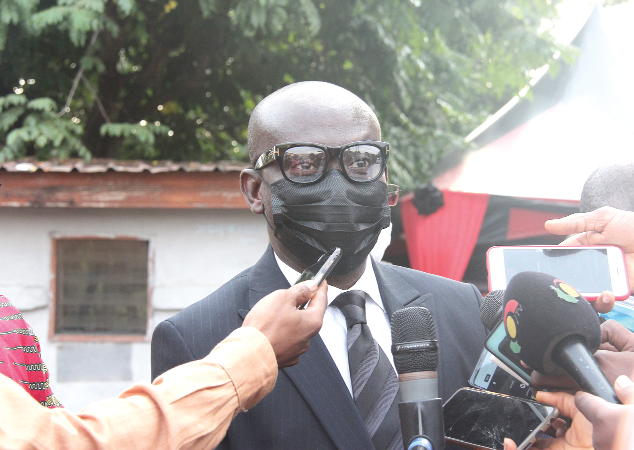 The Attorney-General and Minister of Justice, Mr Godfred Yeboah Dame, has described the late Supreme Court judge, Justice Samuel Kofi Marful-Sau, as a judge who exuded inspiring attributes that other judges must emulate.

He said the late Justice possessed “boldness of character, spirit, integrity and intellectual strength” that allowed him to deliver some of the “excellent judgments” that would stand the test of time.

“For me, what strikes me more is his integrity and incorruptibility. He was one judge who was never scandalised in any way and I believe that posterity and the law practice will look kindly upon him,” the Attorney-General said.

Speaking to the media after commiserating with the late Justice’s family at his Roman Ridge residence in Accra yesterday, Mr Dame said: “I am proud that Justice Marful-Sau allowed honesty and integrity to permeate all his life and his simplicity and modesty in dealing with people as well as the courtesy he exhibited on the bench and relations with lawyers made him stand out.”

“These are virtues these days you will hardly find in some judges but Mr Justice Marful-Sau exuded all of them,” he said.

Mr Dame was accompanied by the Deputy Attorney-General and Minister of Justice, Ms Diana Asonaba Dapaah, to the residence, where the family asked the media to allow them some privacy.

The 64-year-old Justice of the apex court passed away last Tuesday at the Ga East Hospital in Accra.

Justice Marful-Sau was one of the seven justices of the apex court who heard the 2020 election petition filed by former President John Dramani Mahama to challenge the validity of the election of President Akufo-Addo.

He was the fifth most senior judge of the 16-member Supreme Court.

Mr Dame noted that the late Justice of the Supreme Court had intellectual strength that was so immense and almost limitless.

He described him as a very good Law teacher who taught in the Ghana School of Law for 10 years and he was reputed for his strength in civil procedure, mentoring many students as well.

He, therefore, described the passing of Mr Justice Marful-Sau as shocking and sad.

“He was a classic, excellent common law judge,” he said, and commended him for coming up with “solid judgments”.

“In the latter case, Justice Marful-Sau delivered a judgment that preserved the mineral resources of the nation. So, in a way, he has contributed to the preservation of the nation’s resources and this was a judgment I am sure will stand the test of time and he ought to be remembered for it,” the Attorney-General said.

For her part, Ms Dapaah said the attributes of the late Supreme Court judge were valuable assets that the nation would miss.

She said his invaluable attributes of godliness, integrity, knowledge and humility were rarely found in any one human being.

“And for us and many, he has been a mentor who has contributed immensely to the jurisprudence of Ghana. The combination of all these attributes is that Ghana is poorer for his demise,” Ms Dapaah said.

The Deputy Attorney-General said the late judge was one person who never shied away from his faith which reflected strongly in his personal life.

“He had faith that is bordered on certain principles and virtues that are needed in the justice system—fairness, justice and humility are all things we should remember him for,” she said.