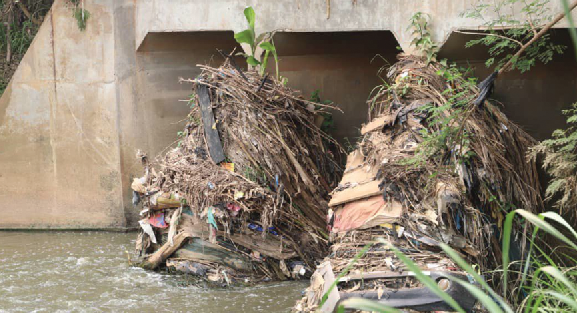 The main bridge linking Kumasi's meat processing hub, Mayanka, Kaase and the Central Business District is reeling from plastic waste and could soon crumble if action is not taken.

Located in the Asokwa District of the region, the structure is gradually being weakened by a heap of plastic waste blocking the flow of a stream beneath it.

As a result, the combination of iron rods, concrete and wood structure is slowly wearing up and could soon cave in.

The stagnant water is gradually "eating up" the concrete while the predominantly plastic bottle waste has taken over the entire arena.

In spite of this apparent danger and unknown to most drivers, the bridge remains one of the busiest transit points connecting parts of the metropolis. 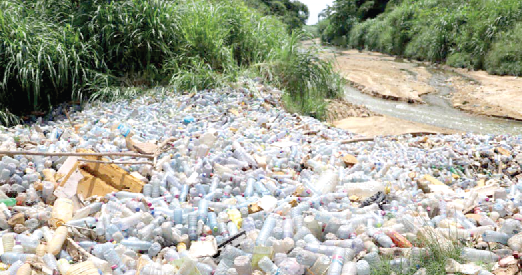 The Kumasi Metropolitan Assembly City Engineer in charge of Roads and Drains, Mr. Atta Poku, who said the situation had not come to his notice, told the Daily Graphic when approached that he would undertake a trip to the site after the Founders’ Day holiday to fully assess the situation.

He said the visit would determine the exact action to be taken, including possible dredging.

Mr. Poku, however, allayed fears that the filth threatened the survival of the bridge.

He said the KMA had the capacity and the men to contain the situation if found to be true.

Strangely, lots of residents, especially commuters of the Kaase road also said they were unaware of the situation.

A few who said they knew about it told the Daily Graphic that they saw a viral video on social media but could not tell when exactly the mess was created.

A butcher at the Mayanka Meat Market, Seidu Miyaki, said he spotted on two occasions a tricycle load of plastic waste being dumped at the site.

He said the operators of the tricycle dumped their load at midnight when no one was around.

Just like the City Engineer, the Assemblyman for the area, Mr John Kokofu Appiah, said he was unaware but would follow it up.