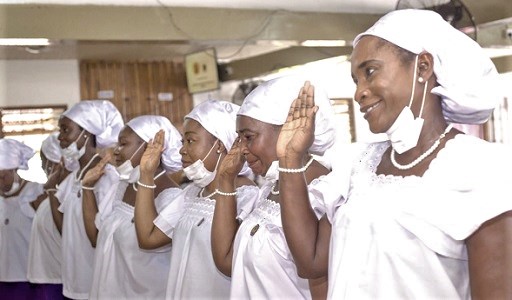 Members of the new executive of the SUWMA of the Grace Methodist Church taking the oath of service
30.5k Shares

A seven-member executive of the Susanna Wesley Mission Auxiliary (SUWMA) has been inducted into office at the Grace Society of the Methodist Church Ghana at Sakaman in Accra.

At the same ceremony, which was performed by the Very Reverend P.S. Ansah, the minister in charge of the Grace Society and Diocesan SUWMA executive, 14 new members were enrolled into full membership.

Delivering the sermon, the Minister in charge of the Ebenezer Methodist Church, Reverend Benjamin Klotekai Clottey, admonished the new executive to live by their pledge and to faithfully serve the church and community.

Speaking on “Jesus accepts all”, Rev. Clottey noted that like Jesus, believers should accept all manner of people irrespective of their social or economic standing in society.

“Remember that no matter where you come from or your background, Jesus will accept you,” he said.

He reminded the new executive that their election to serve was by the grace of God and should be seen as a call for them to work towards the salvation of others.

The SUWMA is a ladies’ association originally formed in the Sekondi Methodist Church in 1960 as the Methodist Ladies Association.

It was renamed SUWMA following a proposal in 1988 by the then President of Conference, Rev. Dr Jacob Adama Stevens, for the organisation to be named after the mother of two dynamic ministers of the Methodist Church, John and Charles Wesley, in recognition of her role as the mother of Methodism.

The new executive, which will be in office for the next three years, has Sister Hilda Peasah as President.

Others include Sister Diana Appiadu as Vice-President, Sister Grace Arthur as Treasurer, and Sister Yvette Eshun as Secretary.