God created us for each other-Nana Konadu eulogises Papa J 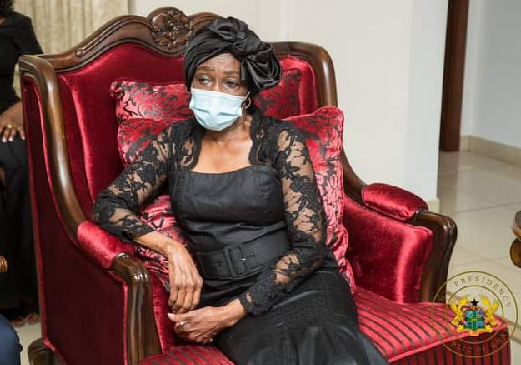 “I know that God created us for each other, and together we made a formidable team, notwithstanding the ups and downs of life.”

This was how the former First Lady, Nana Konadu Agyeman Rawlings, chose to describe her late husband, former President Jerry John Rawlings, in her tribute.

At the state burial service for the late former President at the Black Star Square yesterday, Mrs Agyeman Rawlings, in three pages, told the world all she wanted to say about the man with whom, for over four decades, she built a relationship, first as a schoolmate and then a soul mate and then a life-long partner.

She acknowledged the fact that she had to adapt to life with him, as there was so much she did not know and understand about real life outside the wings and home of her parents, but with his support, she was able to grasp it for him “to take me as I am; I was who I was and there was nothing I could do about it!”

“I had to learn to understand how to be street wise, move along with the flow of your friends and acquaintances… it went against all the upbringing I had intensively received under the roof of my parents, and after several trials, I decided I could not change for the sake of love. You finally understood,” she said.

In her tribute, which was read on her behalf by their third child, Princess Amina Agyeman Rawlings, the former First Lady recounted their life’s journey together, revealing, perhaps, some of the very private, intimate moments of their lives.

“You were for Ghana and then for me”

Indeed, if there was any tribute that people wanted to hear read at the burial service, it was Mrs Rawlings’s, and it did reveal a lot about the relationship that was traced from pre-1978 when they got married to their days after Rawlings had left power.

She told the world why there had been no military fanfare at their wedding, how she had to support him in his decision to lead the country at the various stages and the support she received from him to make an impact in improving the lives of women and empowering them.

“Our wedding remains a memorable day for me. It wasn’t  a military wedding  because of your disillusionment with the military government and the Armed Forces at the time,” she said.

“At our wedding, my father had some advice for both of us: ‘There are several reasons we send girls to school, one of them being so you don't make a man your pillow. You stand on your own and earn your own keep.’

“He advised you to encourage me in my endeavours because ‘a working woman is a free woman’. With your help and support, we were able to make the fight for women and children’s rights a reality with the passing of the Interstate Succession Law, the Family Accountability Law and all the other laws passed on behalf of Ghanaian women and children.

“They are a testament to your concern for your nation when you were made aware of the difficulties women were facing in the country,” Mrs Rawlings said.

After recounting how they both impacted each other in service to the nation, she went back to the intimate note, as she had started, saying her final farewell with a passionate quote from Rachel Wallace Oberie, which ended with the words: ‘He is life and love, the beginning and the end, an hour, a day, an eternity’.

“Rest in perfect peace, my love. May you watch over us all,” she said.

All this was captured in three pages of the 296-page brochure that had hundreds of tributes from personalities ranging from Queen Elizabeth II of the United Kingdom, international organisations, sitting and former Heads of State, relatives, friends, old students of Achimota School, the National Democratic Congress (NDC), the National Democratic Party (NDP), among others.

Some of the tributes described him as the “voice of the voiceless, generous, one who stood for justice and a great patriot”.

The brochure also contained memorable pictures showing his life, other than what were mostly seen in the public domain during the times he served as a military leader and then an elected President.

The tributes from the children were equally emotional, as one of them almost broke down in tears, but they also reflected how he raised them with his philosophy.

Dr Agyeman Rawlings, in her tribute, described her father as her closest friend and confidant who taught her how to strive for excellence in all things.

Yaa Asantewaa Agyeman Rawlings said their father raised them to challenge the ordinary and to push beyond their comfort boundaries, while Amina Agyeman Rawlings described the former President as a “domesticated action man who was always busy in his kitchen, preparing some delicious meal for anyone who visited in the village”.

The only son, Kimathi Agyeman Rawlings, said: “As much as you did for Ghana and for Africa as a whole, you were still around to instill some of the lessons I would hope every father could pass onto his son.”

A leading member of the NDC, Alhaji Huudu Yahaya, who read the party’s tribute, said Rawlings was committed to reversing the socio-economic state of the country — from a country of shortages and queues to a country of planting.

“Queues became a thing of the past and most of Ghanaian professionals began to return to help build their country. Black markets in respect of dealings in foreign exchange by Ghanaians, controlled prices and kalabule became things of the past,” he added.

The NDC talked about how his vision helped transform the educational system, established the University for Development Studies to add to the number of medical schools in the country, as well as his help in expanding the road sector.

Alhaji Yahaya also said it was under the former President that the policy of each region having a polytechnic was rolled out to address the middle manpower requirements for the industrial development of the country.

He said economic and social infrastructure which had largely broken down due to years of neglect underwent serious rehabilitation, and that under Rawlings, electricity from the Akosombo Dam was extended to all the 10 regions of Ghana, the then 110 district capitals and towns and villages, which accelerated development in Ghana.

He noted that the road sector underwent expansion to the rural areas and the ports in Takoradi and Tema saw rehabilitation and expansion, as well as the Kotoka, Kumasi and Tamale airports, while the educational sector was not left out.