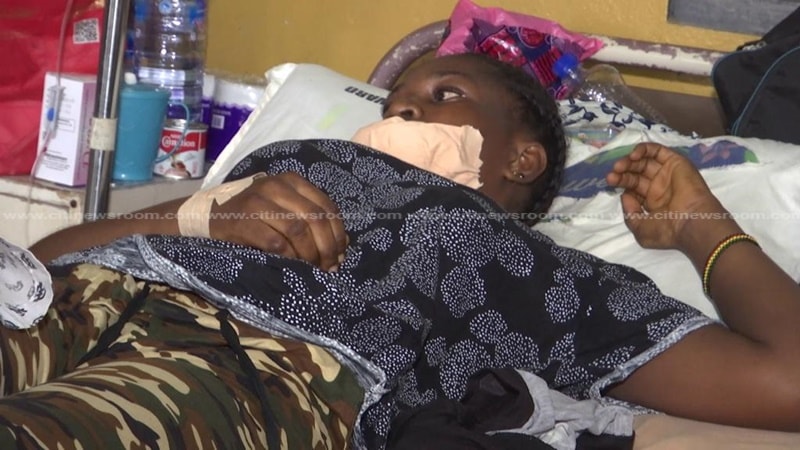 A 23-year-old nurse has been arrested by the Kwesimintsim Police for allegedly biting off the lower lip of a hairdresser, Beatrice Agyapong.

The suspect, Clara Atimperi, is said to have attacked Beatrice because she accepted a lift from her (Clara) boyfriend.

The Western Regional Police Public Relations Officer, DSP Olivia Adiku who confirmed the arrest said the suspect is, however, yet to be charged.

“She has been just arrested and is in police custody. We can’t charge her now because the victim has just been referred to Korle-Bu so we need to wait for more information before you can charge her or take the suspect to court. So, for now a caution statement has been taken from her”.

Beatrice Agyapong, who is a hairdresser at Airport Ridge in Takoradi, said she got a lift last Friday on her way to Kwesimintsim to buy food because she knew the driver of the car.

“I was recently treated of ulcer and was advised by doctors to adopt the habit of eating early to avoid complications. So on Friday 18th January 2019 at about 8:00 am, I decided to go to Kwesimintsim to buy food. Just as I stepped out of the house, I saw a private car known to me passing, so I signaled it to a stop asked for a lift to Kwesimintsim so I could find some food to buy.”

She was however attacked by Clara who’s the driver’s girlfriend, as she was getting ready to eat after walking back to the Saloon at the Airport Ridge.

In their exchanges, Clara bit-off the lower lip of Beatrice after hitting her on the head with an object.

“She held my neck and pushed me, and then hit me with an object in the head, before she grabbed my lip and started chewing it as I struggled to defend myself but to no avail; suddenly I saw my blood splashing on the floor that was the last thing I remember at the salon.”

The Medical officer for the Kwesimintsim Hospital, Dr. Portia Frimpong, in an interview with Accra-based Citi FM said Beatrice would require a plastic surgery to have her lower lip replaced.

She explained that, “upon examination, we realized she had lost more than half of her lower lip. We tried to fix the lost tissue back but to no avail, because the tissue was dead when it was brought in so we had to discard it. For now, we have spoken with the family about the need to seek plastic surgery intervention, so we have given them a letter to go to Korle-Bu as quickly as they can”.