Signposts losing their purpose in Accra 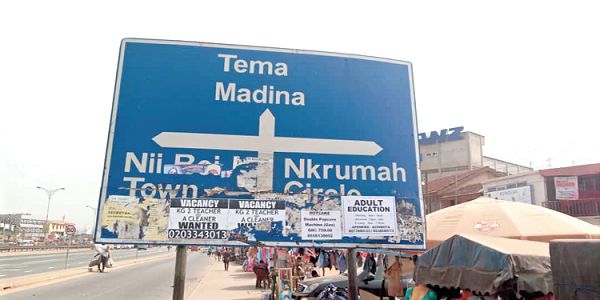 A directional signpost at Lapaz that has been turned into an advertising board
30.5k Shares

A number of signposts in Accra are losing their purpose as they have been defaced with all manner of posters.

Road signs are meant to warn, inform and regulate the flow of vehicular and human traffic, including motorcycles, vehicles, bicycles, pedestrians and other road users.

A Daily Graphic survey of about 20 streets in Accra pointed to the covering of more than 100 signposts in a city struggling with road accidents.

The situation where advertisers; both registered and unregistered, are placing posters and banners on signposts everywhere is rendering them useless.

There are also cases where billboards have been positioned to block some signposts.

The posters, which range from very small stickers to those as large as A2 sheets, include political campaign posters, events publicity posters, those announcing vacancies, selling products and posters showing direction.

When the Daily Graphic contacted the Head of Engineering at the Road Safety Unit at the Department of Urban Roads, Ms Patricia Onny, she said the implication was enormous and could be deadly to all road users.

“For instance, if there is a speed hump and the sign is covered, the person driving may run into it and that could result in injury, death or damage to those in the vehicle as well as the vehicle itself.

Again, if there is a zebra crossing and the sign is covered, the driver would not know and would just zoom in and the outcome is clear,” she said.

Ms Onny said road safety was a collective responsibility and that the situation fell within the jurisdiction of the enforcement agencies.

“At the Department of Urban Roads, everyone has their duty. We cannot go enforcing. The assembly and the police are there to assist Urban Roads with the enforcement issues,” she said.

“I think it will be good if you also approach the mayor on the matter.

There should be bye-laws for everything if you are managing a city and I know there are.

That is why I want you to go to the assembly and find out; because this is an issue that the assembly should be able to handle.”

Meanwhile, the Deputy Head of Public Affairs at the Accra Metropolitan Assembly (AMA), Mr Esmond Ahiadekey, said the issue had to be dealt with by the Department of Urban Roads.

When contacted, the Head of Communication at the National Road Safety Commission (NRSC), Mr Kwame Koduah Atuahene, told the Daily Graphic that the development was as a result of the general indiscipline among the public.

“If drivers are denied the benefit of these signs, as far as their use of the roads are concerned, then the consequence is obvious. So it is not a practice that ought to be encouraged,” he said.

Mr Atuahene argued that because it was a problem of indiscipline, the law enforcement agency responsible needed to deal with those behind the practice, according to the law.

When contacted, the Motor Transport and Traffic Department (MTTD) of the Ghana Police Service said the development had not come to its attention.

The Commanding Officer of the Accra Central MTTD, Assistant Commissioner of Police (ACP), Mr Anderson Fosu-Ackaah, pledged to take up the matter.

“It is against the rules; we'll have a team to go round and apprehend those responsible,” he said.