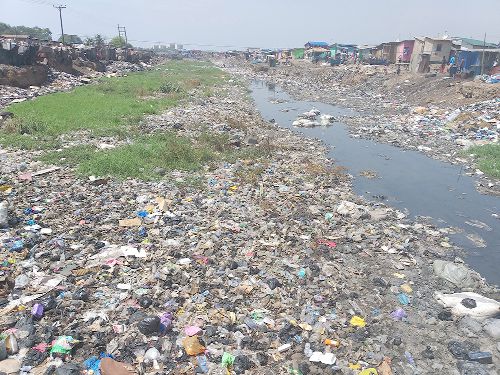 The Odaw drain at the Galloway side of Agbogbloshie is pregnant with waste of all kind. Follow @Graphicgh

The cost burden of maintaining the 10-kilometre Odaw River storm drain is mounting due to pollution by some recalcitrant people, the Minister of Works and Housing, Francis Asenso-Boakye, has said.

He warned that the government's effort to keep the drain at its original design capacity could hit the rocks if the pollution did not cease immediately.

The minister said this when he led a team from the ministry to inspect ongoing dredging works at the lower basin of the Korle Lagoon in Accra on Thursday March 17, 2022.

The inspection followed a front page story in the Daily Graphic of last Wednesday, with the headline: "Odaw drain choked ahead of seasonal rains" which shed light on the disturbing condition of the storm drain.

With financial commitments amounting to some GH¢450 million over the last four years, the government has embarked on a number of interventions to increase the country’s resilience to flooding.

Although the minister said the interventions, namely: the construction, excavation, rechanneling and maintenance of storm drains, had resulted in a reduction of perennial devastating floods across the country in recent years, the rate at which people continued to dump refuse into pathways of drainage facilities, including the Odaw, was cutting back the progress made with the investment.

Against that backdrop, he urged people in flood-prone areas to be responsible, warning: “Under no circumstance should anybody dump solid waste into the drainage channel because it has a devastating effect on lives and properties and on the economy as a whole.”

Mr Asenso-Boakye gave an assurance that the government would continue the ongoing dredging works in the Odaw basin in readiness for the rainy season.

He said it had become necessary for such dredging works to be done periodically due to human activities, including the indiscriminate disposal of solid waste into the drainage channel, which blocked the free flow of water.

"The government has been spending quite a lot of money to dredge the channel periodically because we all know the importance of the Odaw drainage basin and its effects on flooding.

“We also appreciate what happened in the country some eight years ago when many lives were lost, properties destroyed and businesses destroyed," he said.

Mr Asenso-Boakye said the money spent to maintain the drain was from the taxpayer and the continuous pollution of the drain would only increase the cost.

"This money that government is spending is taxpayers’ money, and I have called on Ghanaians to be responsible in the way that we dispose of waste," he said.
"We have had the opportunity to inspect this place to see the waste that is blocking the free flow of storm water; if this continues and it rains, it will create problems for us as a country,” he added.

Pointing to a section of the drain where swathes of plastic waste sat on the water surface, he said: "All these plastics were dumped by human beings and that practice affects everybody."

The minister said very soon the major rains would set in, and that was why the ministry would ensure that dredging works in the Odaw were pursued with all seriousness.

He, however, noted that the dredging was a short-term solution.

Mr Asenso-Boakye said the Greater Accra Resilient and Integrated Development Project, which seeks to address the problems that cause flooding of the drainage channel of the Odaw right from upstream, would bring relief to the people when completed.

“All these are efforts to make sure that flooding is reduced; but it costs a lot of money, and once it’s the government spending money, it means that it’s Ghanaians spending the money," he said.