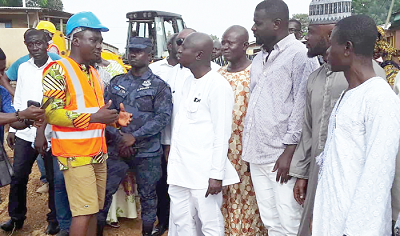 The World Bank has approved $200 million to reconstruct the Odaw-Circle drainage system to forestall the perennial flooding at the Kwame Nkrumah Circle and other parts of Accra.

The Minister of Works and Housing, Mr Samuel Atta Akyea, said the approval was given on May 30, 2019 and indicated that the construction of the drains would improve the drainage system in Accra.

"On May 30, 2019, the World Bank approved $200 million to do the Odaw-Circle challenge. That is very good news for this country. It is going to affect the drainage system in Accra," he said.

Mr Akyea made this known last Wednesday when he inspected the construction of a storm drain, side drains and a road at the Hospital Change Road in Nsawam in the Eastern Region.

The construction work is part of the GH¢2-billion drainage system project in Nsawam awarded to Prompto Logistics.

The other areas slated to benefit from the project, initiated by the New Patriotic Party (NPP) Member of Parliament (MP) for Nsawam-Adoagyiri, Mr Frank Annoh-Dompreh, are Osae Gyan, Methodist and Prisons, all suburbs of the Nsawam-Adoagyiri area.

The minister said President Nana Addo Dankwa Akufo-Addo had given approval for the ministry to focus on the construction of subterranean drains (closed drains) across the country to do away with open drains.

The project, which he described as capital intensive, was estimated at about $5.6 billion.

"We are putting before the Cabinet that we need huge capital injection. The assessment so far tentatively is about $5.6 billion for us to do a world-class drainage system.

"It will solve, comprehensively, what has been mocking this nation since Dr Kwame Nkrumah's days," he said.

Mr Akyea, who is the NPP MP for Akim Abuakwa South, said Ghana had not paid serious attention to the drainage system and indicated that if the situation was not improved, it would continue to experience perennial flooding.

"If we do not tackle it seriously, we will come back every year and complain about floods, about people drowning, cars being overwhelmed by torrential rains, walls falling down and killing people and the rest. Every government should be committed to solving this capital-intensive outlay in terms of drainage challenges," he said.

He said the best engineering engagement worldwide was the construction of subterranean drains that ensured that filth would not be seen and sewage would go underground.

He said open drains were not found in many countries and indicated that Ghana needed closed drains for the simple reason that "we have developed this sub-culture that we should put all our rubbish into open drains, but if the drains are subterranean, where are you going to put your rubbish?”.

"It will be difficult to put rubbish in subterranean drains, but when they are open drains, it fosters the attitude among most Ghanaians to tip their filth in open drains.

"I think that the policy to have subterranean drains, which the President accepts as the best way of doing drains in the country, should be welcomed. It is capital intensive, but we should do it. If we do not do it, we will de-silt the drains all the time,” he stated.

Mr Akyea said the drainage project in Nsawam was symbolic of President Akufo-Addo’s commitment to deal with the drainage challenges facing the country.

He said some people were fixated with the idea that the only drainage challenge was the Odaw-Circle and indicated that with the engineering work carried out so far at the ministry, Ghana had drainage challenges in the Volta and other regions.

"What is happening in Nsawam shows the President's commitment that we are not just tackling the problem in Accra but are interested in the generality of our neighbourhoods because the majority of the people do not live in Accra.

In his remarks, Mr Annoh-Dompreh said Nsawam had been experiencing floods for decades and attributed the situation to the poor drainage system in the area.

He said the GH¢2-billion drainage project in the area was expected to allow for the easy flow of water to prevent perennial flooding in the area.

The MP thanked President Akufo-Addo for giving his support for the construction of the drains in Nsawam to help save lives and properties in the area.