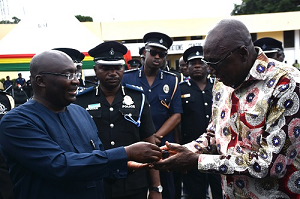 The Vice-President, Dr Mahamudu Bawumia, yesterday presented 109 vehicles from the government to the Ghana Police Service, with the assurance that another batch of 109 vehicles would arrive in the country in three months’ time.

At the hand-over ceremony at the Police Headquarters in Accra, Dr Bawumia said personnel of the security services put their lives on the line for the country, hence the need for the country to also make provision for adequate logistics to protect them while they provided internal security for the nation.

“As we all know, for any country to progress and develop, there must be law and order and there must be security. We demand a lot from the police and they do a lot of good work. But on coming into office, we were quite frankly surprised about the level of logistical challenges that the Police Service faced,” he said.

He said that was why it was necessary for the security services to be treated differently and for them to be provided with adequate logistics, stressing: “This is what we will continue to do.”

The Vice-President narrated an instance when a member of the public, in dire need of the services of the police after a robbery incident, had to hire a vehicle to transport the police, noting: “This is not the type of Police Service we want or deserve in Ghana.”

To that end, he said, the government would do everything possible to ensure that the necessary logistics, such as vehicles, equipment and ammunition, were adequately provided.

“It is for this reason that you are seeing this major rump up of the provision of vehicles for the Ghana Police Service,” he said, adding: “Since 2017, 481 vehicles have been provided for the Police Service, and after these 109, we have received the bill of laden for another 109 which will arrive in three months. So the process is ongoing and we will continue for as long as the need is there,” he assured the Police Service. 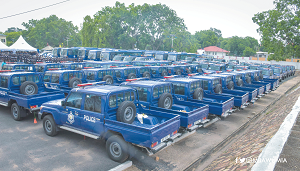 Some of the vehicles parked at the Police Headquarters

The Minister of the Interior, Mr Ambrose Dery, while handing over the vehicles to the Police Service, reiterated President Nana Addo Dankwa Akufo-Addo’s resolve to ensure that every member of the public felt safe in the country, noting that by equipping the security services, the President was fulfilling his resolve in very clear terms.

“The fact that President Akufo-Addo was here some time ago to hand over vehicles and Vice-President Bawumia is also here to do same shows their commitment to internal security. Indeed, we are aware the government has also made donations to the other security agencies, including the Army,” he emphasised.

He added that President Akufo-Addo was also supporting the Ministry of the Interior to deliver on its mandate.

Mr Dery underlined the need for the police to use the vehicles in the line of duty and in an effective way to realise their mandate and also keep the country safe.

Speaking on behalf of the Inspector General of Police (IGP), Mr David Asante-Appeatu, the Deputy IGP, Mr James Oppong-Boanuh, catalogued the challenges facing the service,, including working with limited logistics and inadequate personnel, vehicles and other equipment for operations and patrols.

He said the greater number of police vehicles currently in use had become very expensive to maintain due to their frequent breakdowns because they were old and weak.

He said the situation was such that in some emergency situations the Police Administration had had to engage the services of private transport operators to convey officers to and from operational grounds, at a huge cost to the state.

“The need, therefore, for additional vehicles to replace weaker ones and support our operations and other activities cannot be overemphasised. It is, therefore, very refreshing that we have received these 109 vehicles, particularly the 16 buses which have eluded the service for a long time,” he added.

“I am sure my fellow policemen here will agree with me that in view of these interventions, in addition to other ongoing projects, including the construction of 320 housing units at the National Police Training School at Tesano to ease the accommodation challenges of the service, the best way to express our gratitude to the government and the people of Ghana is for the police to work hard to keep all communities safe and, more importantly, avoid unprofessional conduct,” Mr Oppong-Buanuh said.

He said although it was the responsibility of the government to provide the Ghana Police Service with those facilities, it had been proved over the years that the government alone could not provide all the needs of the service.

He, therefore, appealed to all stakeholders and the public to support the police with logistics and tools and cooperate with the service by volunteering information on criminals, many of whom he said lived in the communities.

Mr Oppong-Buanuh said the Police Service would continue to count on the support and goodwill of the citizens to deliver effective and efficient policing services for the public and pledged that the police would take good care of the vehicles.