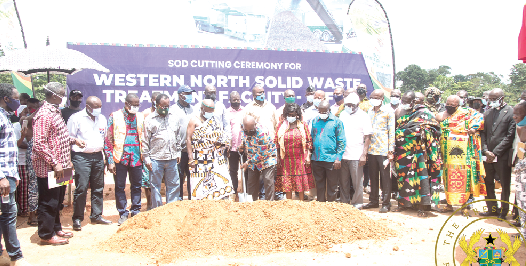 An integrated recycling and compost plant is to be built at Aboanidua in the Wiawso Municipality of the Western North Region.

The project, which is expected to be completed within four months, is a collaboration among Zoomlion Ghana Limited (ZGL), its private partners and the government.

When completed, it will bring to five the number of waste treatment facilities in various regions of the country.

The solid waste treatment plant will have facilities for plastic waste recycling, finished products, compost and sorting workshops, among others, to handle the 200 tonnes of solid waste it will receive daily.

President Nana Addo Dankwa Akufo-Addo last Saturday cut the sod for the construction of the project during his tour of the region.
The President said the issue of sanitation was a top priority for his government, hence the creation of the Ministry of Sanitation and Water Resources.

He said his government was determined to deal with waste management, and would partner and support any effort to effectively and efficiently deal with solid waste which would also provide employment opportunities.

"We are ready to partner the private sector, not only Jospong Group of Companies, but any company aimed at providing jobs and improving the economy," he stressed.

President Akufo-Addo said the country could achieve the United Nations’ Sustainable Development Goals (SDGs) 6, 3, 8, 11 and 13, if waste treatment plants were sited in all the 16 regions.

“With facilities to help manage the waste we create, we will be on course to achieve the SDGs set by the United Nations as we will be able to promote good health and well-being of our people, provide clean water and sanitation as our water bodies would not be dumping grounds.

“Also, it will be a source of decent work and employment opportunity for people, which is the aim of the SDG 8, help preserve and sustain our cities and communities as indicated by SDG 11, and ultimately these, required by SDG 13, would help have a positive impact on the climate,” the President said.

The Minister of Sanitation and Water Resources, Ms. Cecilia Abena Daapah, said a research in 2017 showed that Ghana generated five million tonnes of refuse a day, 60 per cent of which could be turned into organic waste, while another 80 per cent could be recycled into plastics and other products.

The Executive Chairman of the Jospong Group of Companies, who doubles as the Chief Executive Officer of Zoomlion Ghana Limited, Mr Joseph Siaw Agyepong, thanked the chiefs of Sefwi-Wiaso for making available a 100-acre plot for the plant.

He said the plant would create 250 direct and indirect jobs.

“After the sod-cutting by the President, we are starting the construction immediately. All the machines are ready to facilitate the project,” he affirmed.