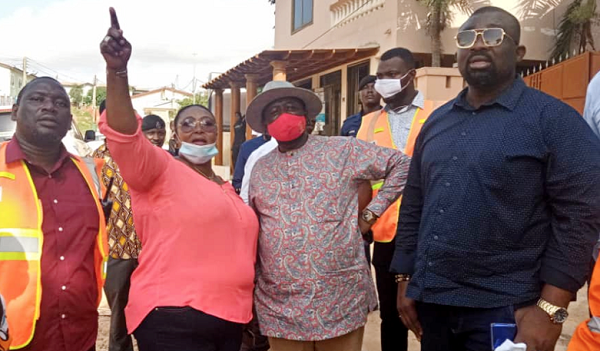 The National Disaster Management Organisation (NADMO) has released a consignment of relief items for distribution to flood victims in the Weija-Gbawe, Ngleshie Amanfro and Ayawaso West Wuogon constituencies.

This followed an assessment of damage to property and disruption of the livelihood of people in the areas following heavy rains and attendant floods in the national capital last Saturday and Sunday.

The Director-General of NADMO, Mr Eric Nana Agyemang-Prempeh, accompanied by the Greater Accra Regional Director of NADMO, Mr Archibald Kobina, led last Tuesday’s tour of the flooded areas in southern parts of Accra to communities in the Weija-Gbawe and Bortianor Ngleshie Amanfro constituencies.

While sympathising with the flood victims in the areas, Mr Agyemang-Prempeh advised them to be on the lookout for more rains in the coming days and take precautionary measures.

On the situation in northern Ghana where the Bagre Dam spillage and continuous torrential rains caused massive flooding in some areas, the director-general appealed to people to be alert in order not to be caught unawares.

Mr Agyemang-Prempeh appealed to the public to cooperate with the government as it worked to prevent such occurrences.

He said the government had shown commitment to the safety and development of all communities in the country and that it was important that the people avoided acts that would draw back the progress.

Mr Agyemang-Prempeh said NADMO was now emphasising on preventive rather than reactionary measures.

“That is the way to go because when a flood occurs, it comes with so much destruction,” he said.

The director-general also called on local government institutions and relevant agencies to ensure that people did not build in watercourses and unauthorised areas.

He further urged the people to stop dumping refuse in gutters.