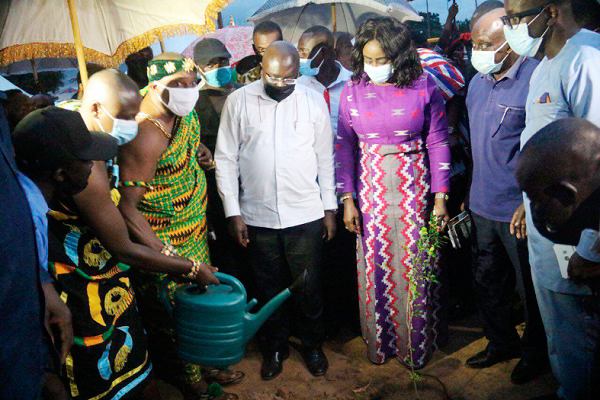 The Vice-President, Dr Mahamudu Bawumia, has cut the sod for the construction of a multi-structure Bonwire Kente Museum to promote the production of kente in mass volumes as an avenue of jobs for the youth and for export.

Kente is a local hand-woven fabric of traditional value to some native parts of Ghana.

It will have a museum with reception lounge, video room  and exhibition hall, and office.

The museum will also serve as a research centre and a storehouse of the history and craft of kente for purposes that include teaching.

The project is being undertaken by the Ghana Tourism Development Project which is facilitating a $40-million loan from the World Bank for the project.

At the ceremony last Tuesday, the Vice-President said a technical and vocational institute for tertiary education would be built in the area to promote the study and weaving of kente, as well as enhance integrated community development.

The Minister of Tourism, Arts and Culture, Mrs Barbara Oteng-Gyasi, said the interest in kente had soared as evidenced during a recent memorial in honour of black American George Floyd who was murdered by police officers in a manner that provoked demonstrations in the United States and elsewhere.

Mrs Oteng-Gyasi said the government would invest heavily in the promotion of the fabric just like other local products to prop up the tourism industry.

The Chief Executive Officer of the Ghana Tourism Authority, Mr Akwasi Agyemang, said the project was part of the larger plan to improve selected crafts and artefacts-making sites in the Ashanti Region.

He said the objective was to improve the performance of tourism in targeted destinations along the craft village.

Oral history had it that two friends from Bonwire learnt how to weave kente by watching how a spider spun its web.

The two brothers, Kuragu and Ameyaw, said to be hunters in the middle of the 17th century, with the help of the Bonwire chief at the time, Nana Bobie Ansah, reportedly showed a sample to the then Asantehene, Opemsuo Osei Tutu I, who later adopted it.

Earlier, Dr Bawumia inaugurated the Juaben Oil Mill Limited owned by the Chairman of the Council of State and the Omanhene of the Juaben Traditional Area, Nana Otuo Siriboe II.