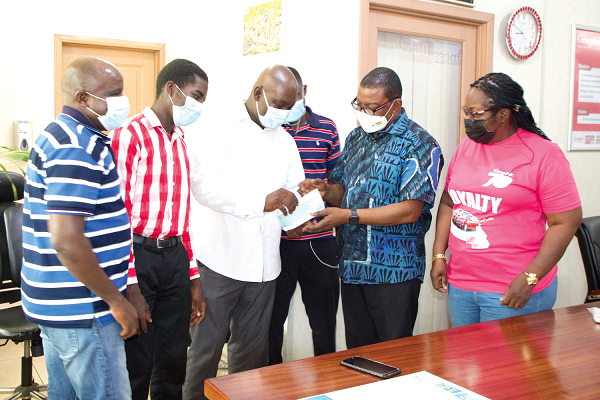 The 1987 Year Group of the Presbyterian Boys’ High School Old Boys Association (ODADEE) has presented a cheque for GH¢10,000 towards the financing of the education needs of Edward Elorm Gbanaglo.

The presentation was in response to an appeal Elorm made through the Daily Graphic for financial assistance to enable him pursue medical studies at the University of Health and Allied Sciences at Ho in the Volta Region.

Elorm gained admission into the university to pursue medicine, but feared he might not be able to complete the programme because he did not have a constant source of funding.

The President of the 1987 Year Group, Mr David Dei Jackson, who presented the cheque to the Graphic Needy Fund, said the plight of Elorm came to the group’s notice when the story was published in the Daily Graphic.

He said after consulting with the global president of the association, “we of the 1987 year group decided to support Elorm with GH¢10,000. I know the global body will be doing something also in that direction soon”.

Mr Jackson explained that once an ODADEE, “you become part of a whole big family”. He said the group’s only difference of opinion was that Elorm had to come to the Daily Graphic, instead of contacting the ‘big family first’.

“So for transparency sake, we are working through you, the Daily Graphic,” he said, adding that he would get back to the old boys association on the matter again since “Elorm made the appeal on behalf of himself and his siblings.

“As it is, this is not the end of it. We will surely come back and top it up,” he said.

The president of the 1987 Year Group of ODADEE said the association would monitor Elorm’s progress and that of his brothers.

The Editor of the Daily Graphic, Mr Kobby Asmah, received the cheque on behalf of the Graphic Needy Fund and Elorm. He said he was happy that whatever was put in the newspaper had got the results expected.

“Today’s brief event gives testimony to the fact that whatever we put out there gets results,” he said adding that whatever the association was contributing would go to support Elorm’s cause.

Mr Asmah said the gesture by the ODADEE ‘87 Year Group was worth emulating and called on like-minded groups and individuals to support Elorm so he could realise his dream of becoming a medical doctor.

“We must not look on for brilliant, needy students like Elorm to go waste because they are incapable of raising funds to support their schooling. The Daily Graphic will partner with your association and walk shoulder to shoulder to make sure that Elorm meets his heart’s desire,” he said.

The beneficiary of the donation, Elorm, was present at the ceremony and expressed his gratitude to all who had donated in support of his  education and that of his brothers and promised not to let them down.

He was grateful especially to the Daily Graphic for publishing his story and the results that had accrued thereof. He said he was expectant that his siblings would also benefit from similar contributions.

The Daily Graphic is currently arranging for a trustee bank account to be opened in the name of Elorm and his siblings. In the meantime, all who wish to support the Gbanaglos could channel their support through the Graphic Needy Fund Momo Account Number 0245311063.