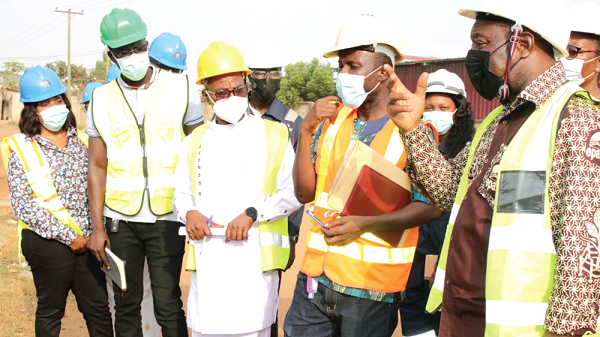 The Environmental Protection Agency (EPA) has directed some industries in Tema to submit a report on the management of their effluent and hazardous waste to it for scrutiny.

The directive followed what officials of the EPA said were notices and complaints received concerning the indiscriminate discharge of effluent into drains and streams at various parts in Tema, Kpone and on the Spintex Road.

The EPA said, the situation, was creating both air and noise pollution which were inconveniencing residents in the affected areas.

The Executive Director of the EPA, Mr Henry Kwabena Kokofu, gave the directive last Friday when he led officials from the agency on a tour of some companies in Tema.

Some of the companies visited included Sentuo Resources, located in the Kpone Industrial area, near Tema, Crown Technology, Printex and Akwaaba Oil Refinery, which is along the light industrial area off the Spintex Road.

The officials from EPA noticed infractions regarding the way some of the companies disposed of their waste, particularly into major drains.

Mr Kokofu tasked the Tema office of the EPA to conduct an immediate assessment of the goings-on and impose a polluter pay fine on defaulting institutions.

At the Sunon Asogli plant, Mr Kokofu said even though the company had done well in the way it was managing its effluent discharges, issues of sea water pollution and vibrations of homes and other installations in Kpone still reamained in view of their proximity to the plant.

“I want to see a report on the company’s buffer and resettlement programme since the EPA still receives reports from residents on vibrations they were still experiencing as a result of the company’s operations,” he said.

The EPA team observed that Sentuo Resources had its electronic waste recycling plant located at the old Kpone Landfill site where the environment was very poor.

The working area for the workers was bad, a situation officials of the EPA said could compromise the health and safety of the workers.

At the time of the visit, the company’s tiles production unit was emitting heavy smoke with accompanying dust and thus compromising the quality of air in the area.

The Executive Director of the EPA was not amused with the situation and directed his technical team to immediately undertake an environmental assessment of the company’s operations.

“As much as we want to encourage industrialisation, environmental governance cannot be compromised,” Mr Kokofu said.