GH¢2m resettlement project takes off in Ketu South this month 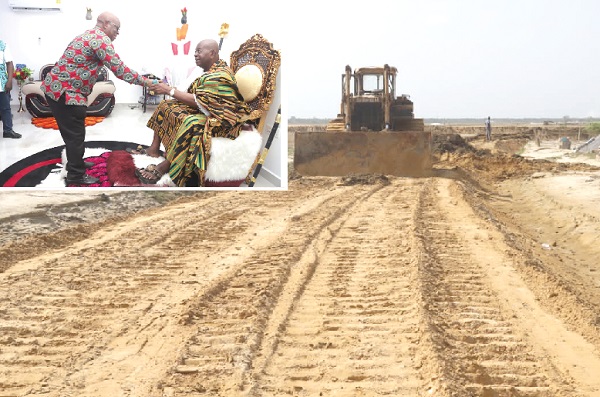 A GH¢2 million project to resettle tidal wave victims in the Ketu South Municipality will begin in two weeks, according to the Municipal Chief Executive (MCE), Maxwell Lugudor.

He said the Ghana Gas Company had made funds available for the project while the Ghana National Petroleum Corporation and the National Lotteries Authority had also pledged to provide resources for the expansion of the project.

Mr Lugudor made this known last Tuesday when the Volta Regional Minister, Dr Archibald Yao Letsa, visited some affected areas in the municipality.

The MCE said the 37-acre project would start with a 15-unit two-bedroom block and would be extended to 100 blocks “in the near future.”

The visit by the regional minister was to enable him to assess the damage caused by last Sunday’s tidal invasion of the area at first-hand and also inspect some of the deployments made by the government in response to the situation.

As of last Tuesday, earth moving equipment was creating access from the main road from Salakope to the building site.

Mr Lugudor said the sponsorship package included a basic school block and a CHPS compound for the new community.

Later in Keta, the regional minister was conducted round the site of the Emancipation Beach Resort, (which was ravaged by the sea), by the MCE, Emmanuel Gemegah.

Mr Gemegah said the damage caused to the resort was a huge loss to Keta.

Dr Letsa ended his visit with a courtesy call on the Awoamefia of the Anlo Traditional Area, Togbi Sri III, in Anloga.

He gave an assurance that the government would not depart from its firm stance to seek a permanent solution to the problem.