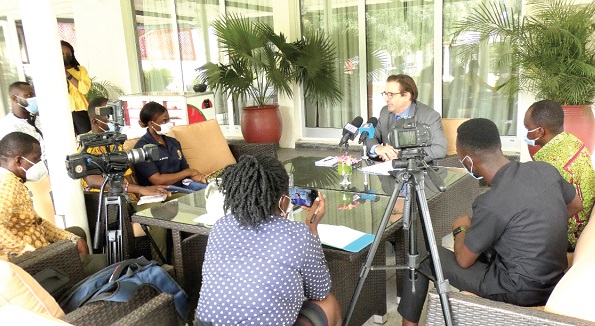 Germany has expressed its commitment to support Ghana’s effort to become a pan-African vaccine manufacturing hub.

“The initiative will help create an enabling environment for local vaccine manufacturing in Africa and tackle barriers and demand siders. It is being backed by €1 billion from the EU budget and European development finance institutions such as the European Investment Bank (EIB),” the German Ambassador to Ghana, Mr Daniel Krull, said.

“This is co-funded by the EU and the German Federal Ministry for Economic Cooperation and Development (BMZ). “The government of Ghana has already committed US$25 million seed money to the overall vaccine manufacture initiative and this project forms an integral part of the overall road map,” he added.

Mr Krull, who was speaking at a press briefing at his residence in Accra yesterday, further said the collaboration would also facilitate the upgrading and strengthening of the Food and Drugs Authority (FDA).

He explained that the support for the FDA was contained in the framework of the Team Europe initiative on manufacturing and access to vaccines, medicines and health technology (MAV+) in Africa.

The Ambassador said representatives of the Presidential Vaccine Manufacturing Committee were currently in Germany to meet stakeholders, adding that “two weeks of meetings, inspection of research facilities and vaccine production sites lies ahead”.

President Nana Addo Dankwa Akufo-Addo is also expected to arrive in Germany today to witness the presentation of a BioNtech modular production facility for MRNA vaccines.

Mr Krull said that in spite of the COVID-19 pandemic, trade figures between Germany and Ghana remained relatively stable, and that Germany would remain a major bilateral provider of development cooperation funds for Ghana.

“The current projects portfolio amounts to over €700 million, focusing on green energy, inclusive growth and good governance,” he said.

He added that economic ties between the two countries had “a long history and a bright future, particularly with the operationalisation of the African Continental Free Trade Area (AfCFTA)”.