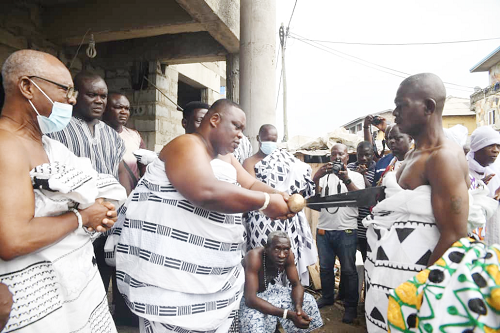 Nii Ayi-Bonte II (2nd left), the Gbese Mantse, taking Nii Ayikwei Osaman I through the oaths while some elders of the Gbese Stool look on

The Gbese Stool, has installed 48-year-old construction engineer, Mr Ebenezer Dormon, as the new Abofu Mantse at a grand durbar at the Gbese Mantse Palace in Accra.

The new chief, who bears the stool name Nii Ayikwei Osaman I, succeeds Nii Amaah II, who passed away in 1987.

In attendance at last Saturday’s ceremony were the Gbese Dzasetse, Nii Okai Kasablofo V; the Gbese Akwaashongtse, Nii Ayi Ardeyfio II; the Gbese Manhean Mantse and Atofo, Nii Larkai VII; and an elder of the Anerje We, Mallam Issah.

The swearing in ceremony marked the conclusion of the traditional rites after Nii Osaman and his elders had been last Thursday at a ceremony at Abofu, near Achimota.

Nii Osaman was taken through the customary oath-swearing ceremony by the Gbese Mantse, Nii Ayi-Bonte II, and Adontehene of the Ga State.

The ceremony also coincided with the swearing-in of his queen mother, Naa Ayikaikor Odanta I; the Shippi of the area, Nii Ayikai Gbetsoolor I, and the Asafoatse, Nii Kwashei Fio.

Abofu is among 93 villages under the Gbese Stool.

Nii Osaman and his entourage were welcomed to the Gbese Mantse Palace with traditional rituals, including the pouring of libation by Numo Dzafloto, the Gbese Mayera Wulomo.

Nii Ayi-Bonte expressed regret that there had not been a successor since the death of Nii Amaah in 1987.

He explained that the vacuum created within that period brought several problems and disunity among the elders and subjects of the area.

He advised the new chief to use his wisdom to foster unity for the development in Abofu, taking into cognisance of the traditional norms and pratices of the Gas.

“You must use your wisdom like King Solomon in the Bible to foster peace and the development of the Abofu area,” he said.

The Gbese Mantse, expressed the hope that with the blessings of the elders of the Gbese Stool, Nii Osaman would succeed in his endeavours.

He also advised the new members of the traditional council not to prioritise the selling of lands, particularly without the knowledge and consent of the new chief and the Gbese Stool.

Nii Kasablofo and the other elders of the Gbese Stool in turn advised the new chief to be humble and to seek the advice of his elders and the Gbese Stool to make his rulership successful.

In an interview, Nii Osaman said he and his Queen Mother and other elders would work to promote peace and unity towards the development of the area.

He said the area was host to some businesses, and that he would lobby some of the companies to employ the youth in the area.