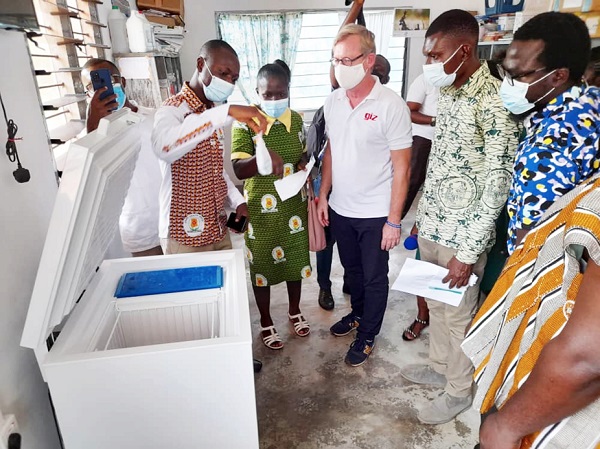 Mr Richard Essien (2nd left), the Kwahu Afram Plains South District Health Director, demonstrating how the vaccine refrigerators powered by the solar energy is aiding the storage of all types of vaccines at the Kwasi Addae CHPS health facility (right picture). With him is Mr Wiesel (4th left), the Project Coordinator of the Green People’s Energy Project of the GIZ

The project — estimated to be worth €300,000 — comes with the installation of six solar panels that can generate two kilowatts of energy to bolster healthcare services such as disinfection of medical cutlery, cooling and storage of polio and COVID-19 vaccines in refrigerators.

The initiative, which has provided a vaccine refrigerator for each of the healthcare facilities, is being implemented under the Green People’s Energy Project operated by the GIZ for CHPS compounds in deprived communities and islands without access to electricity.

The project was funded by the German government which had taken up the global responsibility to supply clean and affordable energy to rural communities in Africa, including Ghana.

At the inauguration of the Kwasi Addae CHIPS compound in the Kwahu Afram Plains South last Thursday, the Project Manager of the Green People’s Energy Project, Mr Rafael Wiese, urged the people living in the beneficiary communities to take advantage of the health facilities to seek early medical attention.

He also appealed to the technicians working on the project to help maintain the system to allow them to last “and give good services, especially for children, women and the older ones”.

The Kwahu Afram Plains South District Health Director, Mr Richard Essien, said the two beneficiary districts were the most deprived in the Eastern Region due to factors such as difficulty in accessing the areas, scattered populations, riverine communities and lack of some basic amenities.

He said it was good that the project was contributing towards the attainment of Sustainable Development Goal Seven of the United Nations, which aimed at achieving affordable and clean energy, as well as SDG Three, which focused on good health and well-being.

According to him, power was required in the delivery of quality healthcare in the area for the storage of vaccines and other health commodities in cold chain (vaccine refrigerator).