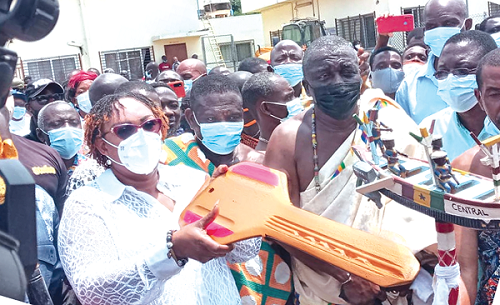 Mrs Mavis Hawa Koomson (left), Minister of Fisheries and Aquaculture Development, turning the dummy key to officially end the close season. With her are Nana Kobina Nketsia V, (2nd right), the Paramount Chief of the Essikado Traditional Area, and some other diginitaries

Artisanal fishers can resume their fishing expeditions on the sea following the lifting of the ban on fishing during the month of July.

Industrial trawlers are, however, expected to continue to observe the close season until the end of this month.

The Minister for Fisheries and Aquaculture Development, Mrs Mavis Hawa Koomson, who turned a symbolic key to the sea to declare it open to artisanal fishing at the Albert Bosomtwi-Sam Fishing Harbour in Sekondi over the weekend, urged the fishing community to resolve to stop all forms of illegal fishing practices.

She named some of the illegal fishing methods as saiko, light fishing, the use of dynamite and harmful chemicals such as DDT (dichloro-diphenyl-trichloroethane) and the use of monofilament and small-size nets to fish.

“I must state that we cannot achieve our goal of recovering the fish stock through the close season if we go back to our old ways,” she stated.

Mrs Koomson said the implementation of the measure was part of the strategies agreed with stakeholders to reduce excessive fishing and over-exploitation of our fish stock in the marine subsector.

“It is also to allow for the recovery of over-exploited fish and help rebuild the depleted marine fish stock. It is expected that sustained implementation of the close season will enable the sector to achieve the desired long-term objective of stock recovery,” the minister said.

The fishing close season was introduced in 2016 to restrict fishing trawlers from going for fishing expeditions at sea.

The measure, which has been observed since the inaugural one, except last year when it was not observed due to COVID-19 measures, is a major step in achieving sustainable fishing.

The ministry and the Fisheries Commission implement the measure to help replenish the depleting fish stock in the marine subsector.

This year’s close season took effect from July 1 for artisanal fishers, while industrial fishers went off from August 1, to end on August 31.

Mrs Koomson expressed appreciation to artisanal fishers for the high rate of compliance with the observation of the close season and expressed the hope that the collaboration and cooperation would continue in subsequent close seasons.

“I am elated to say we have successfully observed the fifth close season,” she said.

She said to lessen the negative economic impact of the close season, the government, through her ministry, supported fishers by distributing rice and oil across the four coastal regions, adding: “We are excited that majority of fishers were able to benefit from the support.”

She vowed to strictly enforce the laws and provide adequate logistics to enable the Fisheries Commission to discharge its duties, including educating the public and enforcing the laws.

“I expect all of us to cooperate as we co-manage the fisheries sector for a more profitable sector,” she emphasised.

For his part, the Omanhen of Essikado, Nana Kobina Nketsia V, urged the minister to take action against foreign fishing vessels in the country's waters.

He said foreigners, such as Chinese, Japanese and Philippino, had no share in the country's fishing industry and so the ministry should ensure that they did not carry out illegal fishing in the country.

"We cannot go to their country and practise what they do here. They are destroying the industry and we must not allow that to continue as a  country," Nana Nketsia stressed.

The Volta Regional Chairman of the Ghana National Canoe Fishermen Council, Mr Seth Kedey, applauded the ministry for engaging stakeholders in every decision regarding the close season.

He said the ban had been lifted at the right time, as August was usually good for bumper harvest.

Mr Kedey said the leaders of the various fishing groups would do their best to educate fishers against illegal activities on the sea.