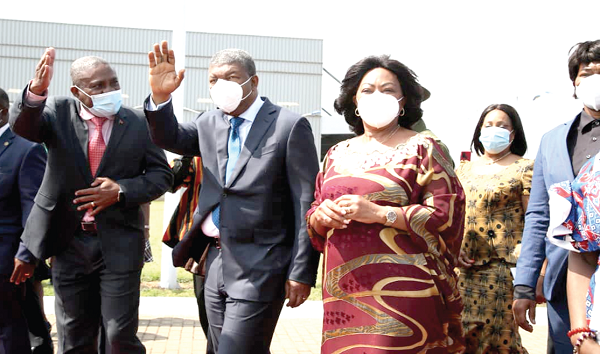 Mr Joao Manual Goncalves Lourenco (2nd left), the President of Angola, responding to cheers from the Angolan Community in Ghana at the Jubilee Lounge of the airport in Accra. Picture: SAMUEL TEI ADANO

The President of Angola, Mr Joao Manuel Goncalves Lourenco, is in Ghana for a three-day official visit.

He arrived yesterday afternoon to a warm welcome by ministers of state, some government officials and Angolans in Ghana.

The Minister of Defence, Mr Dominic Nitiwul; the Minister of Sanitation and Water Resources, Ms Cecilia Abena Dapaah, and some government officials met President Lourenco and his entourage at the Kotoka International Airport.

The Angolan President is in Ghana at the invitation of President Nana Addo Dankwa Akufo-Addo, who was in Angola in August 2019 for a two-day official visit, at the request of Mr Lourenco.

President Lourenco’s visit is geared towards strengthening existing economic ties between the two countries, as well as exploring possible areas of co-operation for mutual benefit.

President Lourenco will, today, visit the Jubilee House and confer with President Akufo-Addo, especially on issues of bilateral interest.

The two leaders will witness the signing of a memorandum of understanding on political consultations by the ministers of Foreign Affairs of the two nations.

The Angolan leader will also tour, lay a wreath and plant a tree at the Kwame Nkrumah Mausoleum in Accra.

Later in the day, he will be hosted to a State Banquet at the Jubilee House by President Akufo-Addo.

On Tuesday, President Lourenco is billed to visit the Secretariat of the African Continental Free Trade Area (AfCFTA), where he will interact with the Secretary General of the body, Wamkele Mene.

After the AfCFTA Secretariat visit, Mr Lourenco is billed to visit and address Members of Parliament.

He leaves for Angola on Wednesday.