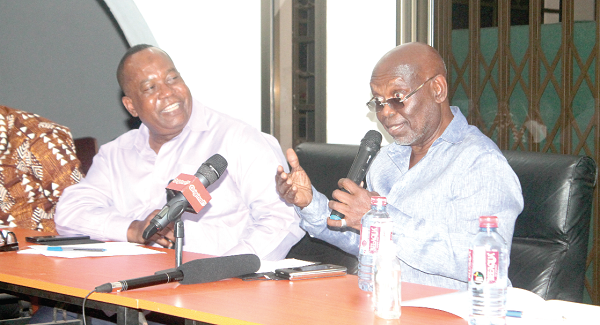 A former Minister of Finance, Professor Kwesi Botchwey, has urged the government to create conditions for constructive discourse on matters of economic management and policies in the wake of the country’s raging fiscal challenges.

In the view of Ghana’s longest-serving Finance Minister, the fiscal challenges being experienced were the result of the country realigning its revenue and expenditure operations to stabilise the economy and set it on the path for growth, a process known as fiscal consolidation.

To create the right political atmosphere for the discourse, he urged the government to “level with the people” and desist from creating the impression that “economic management is simply a matter of genius and competence”.

That, he added, would help prevent situations where figures churned out by the government conflicted with those of the International Monetary Fund (IMF) and also eliminate confusion among the people.

The lecture was organised by Development Challenge (DC), a policy think tank, as part of its dialogue series dubbed: “DC Happy Hour”.

“The hardship that we see frankly resides in the fact that we are going through a period of some fiscal consolidation where we try to rebalance our books, spend less and generate more resources.

“In this case, the first thing to do is level with the people for them to understand the nature of the problem and make sure that public discourse on matters of economic policy is conducted without any insults and abuse, and without an army of communicators and social media interventionists just to give you a bad name,” Prof. Botchwey said.

Prof. Botchwey, who served as Finance Minister from 1982 to 1995, said it would be improper to implement the same approach that was adopted to revive the economy in the 1980s today because “times are different”.

He said based on the conditions at the time, the then Economic Management Team focused on securing long-term concessional resources, instead of going to the bond market.

The former Finance Minister said due to the peculiar dynamics of the economy, the then government also developed and implemented programmes which allowed the free market to determine the exchange rate.

“We applied different methods then because the problems were different. What I see now is a bit distressing. There is no question that we are in fiscal crises. It is going to require a combination of things — more Eurobond borrowing, debt forgiveness, another IMF bailout of some sort and further taxation,” he said.

“But in all these, the hardship that the ordinary person faces must be addressed and ways found to cushion the impact of the fiscal consolidation on them,” he added.

Speaking on other matters, Prof. Botchwey denounced the continued politicisation of the public service, a situation which, he said, hindered efforts to build robust institutions made up of quality personnel who could champion the development of the nation.

He cautioned that the weakness in institutions of state could fuel outrage among the people, create chaos and undermine the country’s democracy.

He also said the continued desperation and frustration among the youth due to the lack of employment opportunities “is a recipe for crisis”.

Prof. Botchwey blamed the situation on the discontinuation of programmes and policies meant to equip the youth to become self-reliant by successive governments and the lack of training opportunities to empower the youth in that regard.