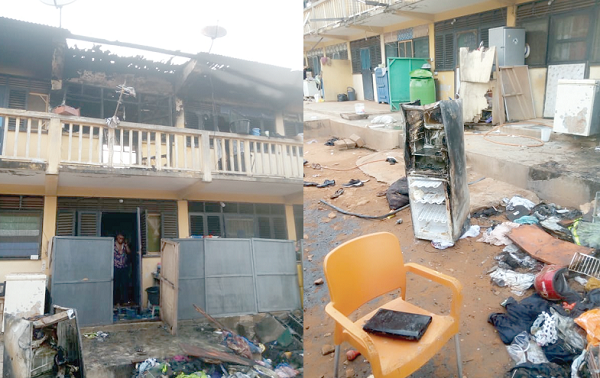 • Parts of the barracks and some belongings that were burnt
30.5k Shares

A block at the Tesano Police Barracks in the Greater Accra Region has been gutted by fire, leaving some police personnel and their families homeless.

About six rooms were affected in the inferno which destroyed property.

The Ghana National Fire Service station at Abelenkpe was called to put out the fire last Monday afternoon.

She said a team of police personnel went to the scene of the incident which was close to the Tesano Police Station and found Block Three on fire.

DSP Mrs Tenge said the occupants of some rooms however managed to salvage their belongings before the fire spread to their rooms.

She said personnel from the fire service managed to prevent the fire from spreading to other blocks and were ultimately able to douse the flames.

Mrs Tenge said the cause of the fire was not known yet.

A victim told the Daily Graphic that the affected families had to put up with friends at the barracks for the night.

When the Daily Graphic visited the scene, it saw affected families moving around in confusion.

Some personal effects could be seen still lying on the compound drenched in water from the fire engines used in dousing the fire.