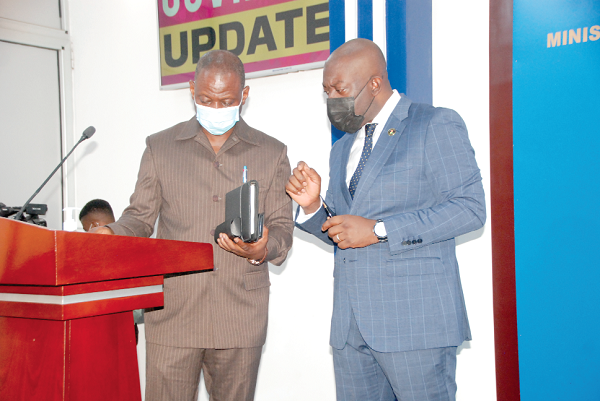 The Ghana Health Service (GHS) has appealed to the public to ensure they wear face masks and wear them the right way since the improper use and handling of the mask could defeat the purpose of protecting one against COVID-19.

The government and the GHS have directed that face masks are worn in public as part of measures to curb the spread of COVID-19.

While adherence to the directive helped achieve some success during the first wave of the pandemic in Ghana last year, their use dropped at the latter stages, a situation that has contributed to the upsurge in infections.

Addressing the Minister’s Press Briefing in Accra yesterday to give an update on the COVID-19 situation in the country, the Director-General of the GHS, Dr Patrick Kuma-Aboagye said: “Face masks must be worn correctly, changed frequently, removed properly, disposed of safely and used in combination with good universal hygiene behaviour in order for them to be effective.”

He said an initial survey conducted mid-last year showed that 44 per cent of Ghanaians were wearing their face masks the right way. However, from a similar research, that figure declined by October the same year to 10 per cent.

He said a research conducted later by the GHS had established that a number of people who wore the face mask the right way had risen from an initial 10 per cent to 42 per cent in January this year.

Dr Kuma-Aboagye said the survey further established that those who were wearing the mask wrongly had decreased from 72 per cent to 36 per cent.

He said although the latest data was encouraging, it was not adequate, explaining that the intended benefits of wearing a face mask could be maximised if majority of the population were also wearing the mask.

Additionally, he said, scientific evidence had been established that wearing a face mask was effective in slowing or stopping transmission of COVID-19, which informed the national decision to make the act mandatory.

Dr Kuma-Aboagye said it was not right to touch the front of the face mask intermittently while it was on and dropping the mask to the chin.

“Please ensure that any time you touch the front of the mask while it is on you would wash or sanitise your hands immediately,” he said.

He said any wrong use of the face mask increased one’s vulnerability because the virus was transmitted through droplets from talking, singing, coughs and sneezes of infected persons which fell directly on the faces or surfaces and could be picked with the hands and introduced to the body by touching the face mask with unclean hands.

“The surgical mask should be used not more than 12 hours and are single use masks. The reusable cloth mask should be removed holding the ear strings and dropped directly into soapy water. They should be washed and rinsed under clean running water; dried in the sun and if possible ironed before every re-use.

“Every mask should be replaced immediately it gets damp,” he said, advising that the mask should be used in combination with all other safety protocols on COVID-19.

“In addition, wash your hands frequently with soap under running water for at least 20 seconds while ensuring that the palms and in between the fingers and nails are washed properly. Ensure also to wash up to a little above the wrist and avoid touching your face, especially your mouth, nose and eyes,” he said.

The GHS has stated that there were three types of face masks: the disposable surgical mask, also called a medical mask, which covers the lower face and may be pleated and is cuplike or duckbill-shaped; the N95, which is also cuplike and often has N95 embossed on it, and the reusable cloth mask.

Writer’s email:  This email address is being protected from spambots. You need JavaScript enabled to view it.