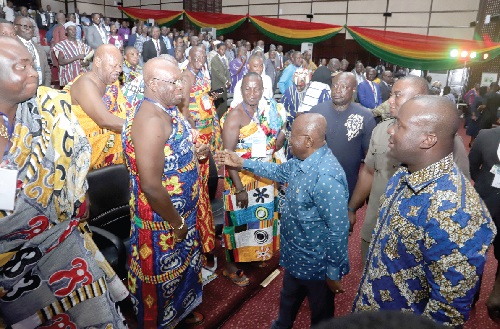 President Nana Addo Dankwa Akuffo-Addo has called on the Lands Commission to expedite action on the digitalisation of land administration in the country to ensure efficiency.

He said even though the commission had moved some of its services online, it was unacceptable that some sections of the country’s land administration were still operating in a manual environment in the age of technology.

The President made the call at the Land Conference 2022 in Accra yesterday.

It was on the theme: “Leveraging national policy, legislation and institutional capacity towards sustaining socio-economic development”.

The conference is aimed at providing a multi-stakeholder platform for policy dialogue on land issues and challenges and propose recommendations to the government for solutions.

President Akufo-Addo said the significance of land to socio-economic development was self-evident, since all human activities revolved around land.

He said a rapidly growing population, coupled with competing uses of land, continued to put immense pressure on land resources.

“Our quest to transform the economy to bring about the much-needed development and prosperity to our people cannot be achieved if we fail to anchor effective land administration,” he said.

According to him, successive governments had strived to improve the country's land administration regime over the years.

He mentioned the Land Administration Project (LAP), phases one and two, which sought to lay the foundation and consolidate urban and rural land management administration and management systems for efficient and transparent land service delivery as one of the initiatives.

The President said such interventions had yielded some results, such as reforms of the Lands Commission through the enactment of the Land Commission Act 2008 (Act 767) and the establishment of five client service units at the commission to enhance service delivery.

Others were the establishment of the Customary Land Secretariat, the reform of the Judiciary through the establishment of specialised land courts and the automation of some courts, the enactment of the Land Use and Spatial Planning Act 2016, Act 925, the introduction of the new three-tier station of planning model and the development of a national spatial development framework.

President Akufo-Addo, however, said despite the interventions, land administration in the country was still fraught with many challenges.

He, therefore, called for an objective analysis of the current land tenure system, an assessment of the continuing inefficiency of the customary system of land ownership and its dynamics and adaptability to meet the growing demands of land users.

According to him, the Land Act 2020 (Act 1036) provided a strong foundation for fashioning out workable and efficient land administration and also had far-reaching provisions which, if implemented, would go a long way to build effective land administration.

For his part, the Minister of Lands and Natural Resources, Samuel Abu Jinapor, said although secure land and property rights played an important role in governance and sustainable development, there was still much to be done to ensure efficient land administration in country.

He said inefficiencies in land administration had manifested in challenges in land service delivery and their attendant costs, including conflicting judicial decisions.

"We are poised to build here in our country a robust and functioning land administration which will discard the usual inefficiencies, fraud and delays and which will be anchored on the principles of transparency and integrity," the minister added.

In line with that, he said, the ministry had rolled out an Enterprise Land Information System (ELIS) programme and successfully migrated some of its operations online.