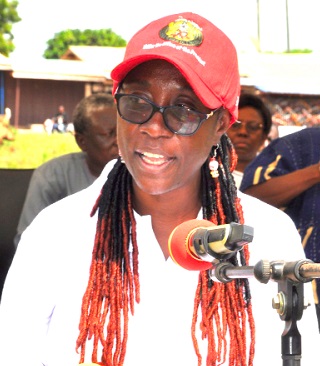 About 20, 949 persons in the Volta Region are living with HIV, according to the 2020 HIV and AIDS estimates.

Approximately 64 per cent of them can be found in the Ho, Hohoe, Ketu South, Ketu North and Kpando municipalities, and the South Dayi District.

Meanwhile, only 11,328 (55 per cent) of the estimated people living with HIV in the region are on life-long antiretroviral treatment.

The Technical Coordinator of the Ghana AIDS Commission Technical Support Unit in the Volta Region, Mary Naa Asheley Anyomi, disclosed these at a durbar at the Agorkpo R.C. Park in Sogakope last week Friday to mark World AIDS Day.

The commemoration, which was on the theme, “20 years of Multi-Sectoral Response to HIV and AIDS in Ghana: Accelerating progress to end AIDS”, was done alongside the regional Farmers Day event at the same venue.

Mrs Anyomi said the estimates suggested that two out of every 100 people in the region, which has a population of 1,649,523 according to the 2021 Population and Housing Census, were living with HIV.

If this estimate is anything to go by, it will mean that close to 33,000 residents in the Volta Region are currently living with HIV, which is more than the figure provided by the 2020 HIV and AIDS estimates.

The region further recorded 1,013 new infections for all ages in the past two years, she said.

Mrs Anyomi described the trend as alarming, suggesting that the region with a population of 1.6 million may record 9,117 more new infections by 2030, if no action was taken to reduce the spread of the disease.

“This may also affect the region’s efforts to attain the global target of ending AIDS by 2030,” she warned.

Mrs Anyomi maintained that it was important to get tested to know one’s HIV status, and seek early treatment if tested positive.

“If a person tests positive there is still hope because with medication, he or she can live a normal life,” she confirmed.

Mrs Anyomi said to reduce HIV infections, it was important to create the necessary awareness and educate the public on the modes of transmission, as well as the precautions needed to avoid getting infected with HIV.

She said HIV was transmitted mainly through “unprotected sex with an infected person, unscreened blood product and mother-to-child transmission.”

In the case of infected pregnant women, Mrs Anyomi gave an assurance that there were interventions in place to protect the unborn child from getting infected by the mother.

In that vein, she appealed to pregnant women to accept the offer to test for HIV, which was optional at the hospital.

The technical coordinator urged the public to desist from stigmatising people living with HIV, saying that such an unfair stance against them would neither encourage them to reveal their status to their loved ones, nor encourage them to access health care.

The Volta Regional Minister, Dr Archibald Yao Letsa, in a contribution, said HIV and AIDS was one of the key health challenges facing the region.

Dr Letsa said the theme was appropriate in its timing and a clarion call to all and sundry to take take the actions necessary to address inequalities that drove and perpetuated HIV and AIDS.

He noted that intersecting inequalities ranging from social, economic, to gender inequalities continued to exist and those inequalities represented critical barriers to people living with or affected by HIV and those at higher risk of infection from accessing life-saving and essential HIV services.