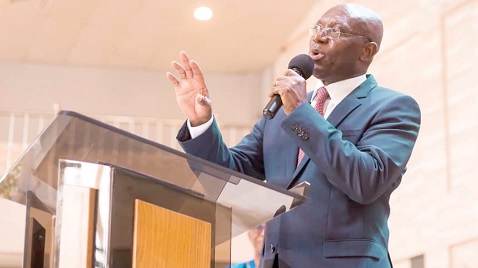 “You must undertake ground validation checks, get a professional to prepare the site plan, and a search conducted at the Lands Commission to ascertain the true ownership and the eventual status of the land before making any determination for the acquisition of any land,” he further advised.

Addressing the annual Royal Conference of the Church of Pentecost at the Pentecost Convention Centre at Gomoa Fetteh in the Central Region, Mr Dadson said such checks were important to reduce the incidence of land litigation in the country.

He said the commission was working to ensure that issues of land registration were seamlessly processed in order to curb the arbitrary land litigation cases saddling the country’s law courts.

Mr Dadson said in that regard, the commission had started a digitisation of its system by having its manual records scanned, georeferenced and digitised to bring more speed to the services it provided.

Mr Dadson, however, identified multiple sales of land and multiple judgements by the courts as a major challenge militating against the work of the commission.

He, however, gave the assurance that his outfit was undertaking far-reaching steps to solve the lingering problems associated with land registration and acquisition.

Mr Dadson emphasised that the commission was operating under the Lands Commission’s Act, 2008 (Act 767) which mandated it, among other things, to manage all public lands vested in the President, and also to advise the government, local authorities and traditional authorities on the policy framework.

He said Section 10 of the Act barred the acquisition of land by non-citizens, stressing that non-citizens could not be given freehold of land.

He said “freehold given before 1969 is now 50 years commencing August 22, 1969, to non-Ghanaians”, adding that freehold reversion was vested in the government, while leasehold interest should not exceed 50 years for non-Ghanaians.

He commended the Church of Pentecost for giving the Lands Commission an opportunity to sensitise over 2,000 of its members on such a platform.

The General Secretary of the church, Apostle Alexander Nana Yaw Kumi Larbi, said the conference was to mobilise the chiefs, queen mothers, and family heads to equip them with the word of God and to also take them through some training on land issues, and chieftaincy-related matters in resolving land disputes that confronted them.