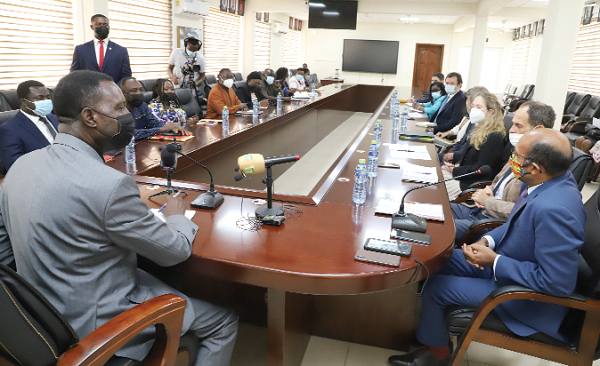 Dr Yaw Osei Adutwum (left), Minister of Education, addressing the German and the European Union delegation during a courtesy call on him in Accra. Picture GABRIEL AHIABOR Follow @Graphicgh

The technical and vocational education and training (TVET) sector has received a further boost, with the European Union (EU) investing €17 million in the sector to enhance skills training.

That is in addition to the €15 million the German Government has invested in the sector in the last five years.

Per the agreement, the EU funding for the sector will cover a period of four years and forms part of the union's larger support programme.

The EU Ambassador to Ghana, lrchad Razaaly, made this known when an EU and German delegation paid a courtesy call on the Minister of Education, Dr Yaw Osei Adutwum, in Accra yesterday.

Mr Razaaly commended Ghana and the government for taking TVET education very seriously, indicating that it was the reason the EU wanted to partner the Ministry of Education.

He indicated that the financial support would focus on areas which could bring more sustainable growth and development to the country.

The Ambassador noted that education was a key area of engagement of the EU worldwide because it saw education as being critical to the development of people.

He made mention of the series of structural reforms that were being introduced by the government in the educational sector, and the fact that those initiatives were being supported by the EU.
instance, he cited the sector skills board as one of the institutions receiving support from the EU.

He said beyond TVET, second cycle and tertiary education, the EU was one big player when it came to receiving undergraduate and graduate students, and that Ghana was not a stranger to that, since many youth from the country had benefitted variously in those areas.

Dr Adutwum, welcoming the delegation to his office, said the proposal could not have come at a better time, as the country had recognised that the only way to bounce back from the setbacks of the coronavirus disease (COVID-19) pandemic was to change its approach to education, especially with regard to skills training.

He expressed his excitement about the progress that the country had made in the area of TVET.

The Education Minister further revealed that President Nana Addo Dankwa Akufo-Addo had tasked him to implement the dual system of TVET education that had helped European countries, including Germany, saying the implementation had already started with the establishment of the Commission for TVET.

Dr Adutwum intimated that TVET education had been the missing link the country needed for growth because it looked like it was producing graduates who only knew the theoretical aspects of what they had been taught.

That era of education, he said, was over, and that the ministry was no longer going to wait for students to graduate before they had a feel of industry.

"That era is over and we are in that era when what we will produce will be what the country needs," he said.

The minister said the ministry had noticed that the link between tertiary and pre-tertiary education in TVET was not a clear-cut one, for which reason there would be more high school and tertiary collaboration in the areas of TVET and practical skills training.

"What the country needs is not theory memorisation but skills development, critical thinking, a collaborative learning environment and effective communication taking place.

“So we are training our students to be able to work in every part of the world because the skills they have are 21st century skills,” he explained.

The Head of Development Cooperation of the German Embassy in Accra, Dorothee Dinkelaker, said Ghana and Germany had had a long-standing relationship in TVET since 2011.

She advised the ministry to include the private sector in TVET, adding that the inclusion of that sector was one of the important aspects TVET needed for successful reforms.

Ms Dinkelaker said Germany and the EU stood by Ghana and would continue to support it in terms of TVET.