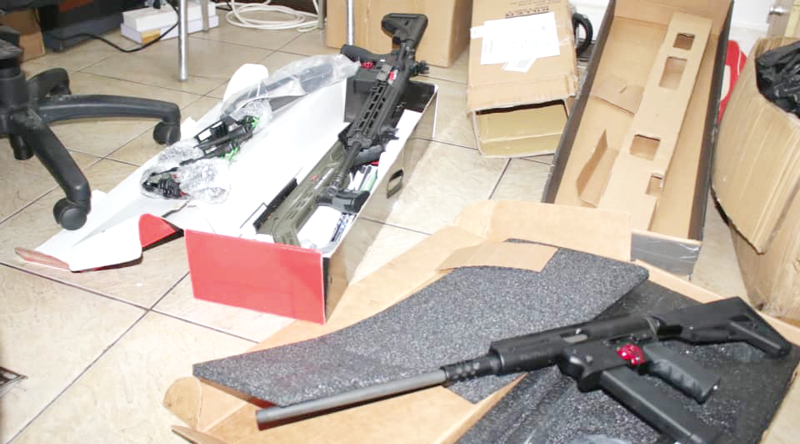 The weapons which were detected in a consignment of personal effects at the Golden Jubilee Terminal at the Tema Port. Picture: DELLA RUSSEL OCLOO

The rifles, made up of a 10-millimetre Aero Survival Rifle, fitted with binoculars, an HK 416 semi-automatic rifle and a 4 x 32 premium scope crossbolts dead silent rifle, were detected yesterday during a physical examination on the consignment which arrived from the United States of America in a container numbered MEDU4810912.

The container had on board four vehicles and personal effects loaded in blue barrels, one of which was found to be holding the weapons.

According to customs officials, an agent, Mr Bernard Adjei Kwarteng, who processed the container for clearing, was assisting them in investigations.

A seizure notice has been placed on the weapons and conveyed to the State Warehouse facility at the port.

A Principal Revenue Officer of the Ghana Revenue Authority in charge of the Golden Jubilee Car Park at the Tema Port, Mr Cyril Ekahe, told the Daily Graphic that the importation of the weapons contravened customs regulations which required importers of weapons to secure the necessary permits before bringing them into the country.

He said the diligence of the examination officer led to the detection of the weapons, since the container scanners were usually not able to vividly determine nor isolate items in containers arriving at the ports.

"The scan images are not able to determine nor isolate items in the container and if the physical examination had not been done, we wouldn't have detected the weapons because the container was also meant for door-to-door delivery,” Mr Ekahe said.

A report on the incident, he indicated, had been submitted to the Tema Sector Commander for the necessary action.