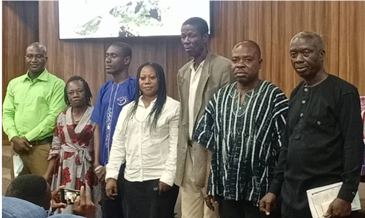 The election of the national executive committee (NEC) members commenced the strengthening of CoFAG structures throughout the country.

At a one-day national special delegates held at the GNAT Hall in Accra on Tuesday, November 9, 2021, the CoFAG NEC elections, which was supervised by the Electoral Commission of Ghana, saw Mr Patrick Ndabiah elected unopposed as the President.

In a short remarks, Mr Ndabiah mentioned that CoFAG had come a long way and thanked the Electoral Commission and all who have contributed over the years towards the association's growth.

He added that for the association and the coconut industry in general to meet the target of $2bn foreign exchange for the country by 2025 depends mainly on the work of farmers.

According to Mr Ndabiah, the coconut industry has considerable potential to support the country's development since it provides jobs, livelihoods and resources for industrialisation and foreign exchange.

He, therefore, called on the new executives and coconut farmers at the community, district, and regional levels to put their hands on the wheel to propel the coconut industry to greater heights.