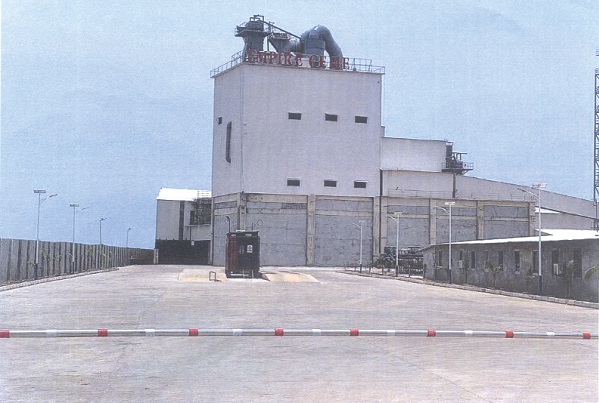 A portion of the cement manufacturing plant Follow @Graphicgh

Local cement manufacturers have expressed serious concern about a new entrant, Empire Cement Ghana Limited, located at Weija in Accra, which they allege is producing and distributing cement without authorisation.

They have also accused the company of operating under unethical environmental conditions.

But Empire Cement has denounced and discredited the accusations, saying it has not started producing cement at the factory for the open market.

It said it had permit to produce cement papers and was still working with the Environmental Protection Agency (EPA) for a permit to commence cement production.

Both the EPA and the Ghana Standards Authority (GSA) confirmed to the Daily Graphic that they had not issued permits to Empire Cement to produce and distribute cement in the country.

The Director-General of the GSA, Prof. Alex Dodoo, said although the authority had not certified any cement brand called Empire, a market surveillance conducted by officers of the authority indicated that its product was being sold on the open market, with the GSA’s quality mark illegally embossed on it.

In a letter dated March 31, 2022, a copy of which the Daily Graphic had sighted, the GSA wrote to alert the company to its findings.

"Preliminary checks on the samples taken indicate that you are using the certification mark provided for in L.I. 662 (as amended by L.I. 664) without a licence and certificate from the GSA,” the letter stated.

The authority also emphasised to the company that the practice constituted an offence and in blatant contravention of the applicable legislation.

"It misleads consumers and the public that your product has been certified as conforming to the applicable national standards and is both fit for purpose and safe to use when it has, in fact, not been certified at all.

"Products that are certified are issued a specific licence number which appears under the Certification Mark as approved," it stated.

The Executive Director of the EPA, Dr Henry Kokofu, in a separate interview, said the position of the agency was that the operations of the company would not be in the health interest of residents of the area.

He cited some of the residential communities in close range of the company to include McCarthy Hill and Tetegu.

Dr Kokofu added that the EPA had, therefore, denied the company a permit.

He added that after the EPA's investigations, it realised that the operations of the company were going to be detrimental to another company, Panbros Salt Industries Ltd, which produced salt and had been established long before the cement manufacturer came to the site.

He explained that the agency was no longer handling the issue because Empire Cement had petitioned the Minister of Environment, Science, Technology and Innovation on the refusal of the agency to grant the permit to operate.

When contacted, a source at the Chamber of Cement Manufacturers Ghana said its market survey had found some of Empire’s products on the market.

The source said, “some of its products are on the market. If you go to Kasoa today, there is a place we have identified where the products are sold”.

Relatedly, the Chief Executive Officer (CEO) of Empire Cement, Nana Obokomatta IX, explained that the factory was producing the packaging materials in anticipation of obtaining a permit for the production and bagging of cement, after an Environmental Impact Assessment (EIA) had been conducted and the report submitted to the EPA for review.

Nana Obokomatta IX, who is also the Chief of Gomoa Dasun and known in private life as Archibald Ato Paitoo, said the company had to stop producing the cement packaging because some people alleged that it was producing real cement.

However, a police investigative team sent to the factory made no such finding, he stated.

Beyond denying that the company was producing for the market, Nana Obokomatta said he had no idea how the product got to the market because it was certainly not produced at the Empire Cement factory.

"This is the work of our detractors who may have bagged this product and sold it on the market to give us a bad image,” he said.

When this reporter visited and toured a section of the factory, which has silos, there was no sign of production.

Recounting the journey of the company, Nana Obokomatta said sod-cutting for the construction of the factory was done on June 12, 2020, at Weija, after which Empire Cement applied to the EPA for a permit to commence the production of cement paper bags.

He said on June 29, 2020, the EPA issued a notice to the company to cease construction and visited the premises for inspection but did not see any cement production.

The Daily Graphic has sighted a copy of the report written by Chief Superintendent Joseph Oppong of the Accra Regional Crime Office of the Ghana Police Service, which states in part: "On 28/6/2021, police visited the factory in the company of Staff Sgt (retd) Osei Dacosta of the Environmental Protection Agency, after a report was made on 25/06/2021 in order to be acquainted with the activities of the company.

“It was observed on arrival that the place was still under construction but was not operational."

On August 18, 2020, Empire Cement applied to the EPA for a permit to commence enabling works, including the construction of a fence wall and drainage structures at the project site.

The EPA granted the permission the following day, August 19, 2020, saying it would issue an environmental permit for the proposed factory project based on the EIA that would be submitted.

The company, subsequently, submitted the EIA report to the EPA, which reviewed it and sought a meeting with the company to discuss some key issues before the report would be revised.

After the discussions, which bordered on the coexistence of Panbros Salt and Empire, the EPA declined to issue the permit to Empire Cement for operations.

The company subsequently petitioned the Minister of Environment, Science, Technology and Innovation.

On June 12, 2020, the Daily Graphic reported the sod-cutting ceremony for the construction of the cement factory in the Weija-Gbawe municipality.

At the time, the factory was designated under the government’s One-district, One-factory (1D1F) initiative and was expected to be completed in a year.

The project is being undertaken by Empire Cement Ghana Limited, in partnership with Obokom Civil Engineering Limited, at an estimated cost of $50 million.

Its ownership structure was given as 70 per cent by Chinese investors and 30 per cent by Obokom Civil Engineering.

According to the investors, the factory was expected to give employment to 13,000 people, directly and indirectly.