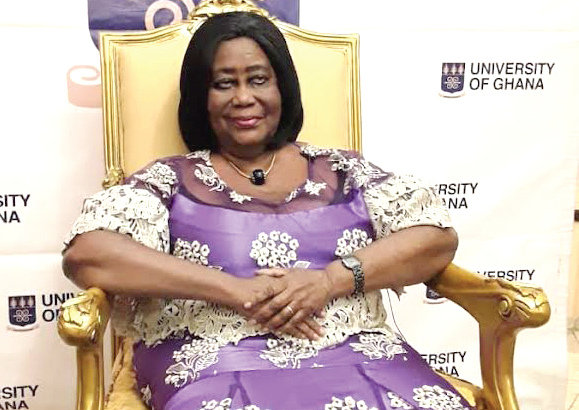 Mary Chinery-Hesse — Chancellor of the University of Ghana Follow @Graphicgh

For the Chancellor of the University of Ghana, Mary Chinery-Hesse, the country has made considerable progress in women empowerment.

Currently, she said, there were a lot more women in leadership positions and women pursuing higher education as against what existed in her generation.

Reminiscing what women of her generation had to go through to climb to the top, she said it was an era where the woman’s position was made clear to her - she was and played second fiddle to men, pursuing higher education as a woman meant they would not get a man to marry them.

Men were seen as the breadwinners and so a lot of women at that time found out their lives were improved when they got married.

Besides, there were not enough schools so for parents who had many children and didn’t have money, the girls had to drop out for the boys to go to school.

These factors, she explained, led to less women acquiring higher education and gaining employment in the formal sector in her era.

“About 90 per cent of the women I went to school with went through difficulty getting their parents to agree to them pursuing higher education. I know of situations where very brilliant girls did the ‘O’ levels and their parents who could afford to see them through further education did not allow them to do so. The fear was that they would not get husbands and for parents it was more important for their children to get married. Who wants to marry a graduate?”

Indeed, it was because of what pertained at that time with regard to higher education for girls that according to her when she and her twin sister, Maud, graduated in 1962 with a university degree, it came as a surprise to so many people in this country that their parents had allowed them (girls) to pursue tertiary education.

Speaking to the Daily Graphic about her life and the challenges her generation of women went through to acquire higher education and subsequently rise to the top in their careers, Mrs Chinery Hesse said, being girls, she and her sister’s graduation from the university was so rare at the time that the first President, Dr Kwame Nkrumah, decided to use that moment to launch a big campaign to get parents to have a mindset change about educating the girl-child.

At her residence where this interview took place, she spoke of how Dr Nkrumah asked the West African Graphic Company Limited (WAGCL) now Graphic Communications Group Limited, publishers of The Daily Graphic and Sunday Mirror now Mirror, to give them prominence in the paper for their achievement.

The WAGCL, consequently, went ahead to publish their pictures on the front page of the Sunday Mirror with an accompanying story extolling their fete. These publications were given to cinema vans that operated those days to be taken round every village in the country. As the vans distributed copies of the publication, they asked teachers and schools to discuss their success stories with the children.

Years after this, Mrs Chinery-Hesse, who is a product of the Wesley Girls’ High School, said some prominent women met her and after breaking down in tears, informed her that had it not been what Dr Nkrumah did through the Daily Graphic publication, they would never have gone to school to become who they were.

Career and challenges as a woman

Mrs Chinery-Hesse was recruited into the Ghana Civil Service by the late Ghanaian politician and economist, Mr J. H. Mensah. At the Planning Commission where she started work, she was a senior officer (it was very rare to find a woman occupy that position in those days). Throwing light on the challenges she went through at the time as a woman in that high position, she recalled when she had to represent her office on the committee writing the seven-year development plan of the country. She recalled that she was the only woman on the committee and because of the stereotype against women at the time, when she raised her hand or mouth to speak, the reaction of the men were as if to ask her what better thing did she have to say. But these were not enough to intimidate her.

According to her, in order to earn the respect of the men, she adopted various strategies including not getting angry when they looked down on her not to force her way through them to get their approval and to intervene only when she was sure about what she had to say.

“I prepared very well before attending any meeting so when I talk, I’m sure of what I say. Because of this, with time, they came to appreciate my submissions and I won their appreciation,” she said smilingly. Her hard work paid off because instead of age 50 years and above that at the time people became Chief Directors, she was appointed the Chief Director at the Ministry of Finance and Planning at the age of 35 years. By this, Mrs Chinery-Hesse became the first woman to take up that position in the ministry and in the Ghana Home Service too. She was the first woman to become Principal Secretary and later Senior Principal Secretary.

Work at the UN

Mrs Chinery-Hesse joined the United Nations and her first post was that of Resident Coordinator of the UN Systems and Resident Representative of the United Nations Development Programme. She was later appointed the Deputy Director-General of the International Labour Organisation (ILO) making her the first woman to occupy that position (in the 70 years of the founding of that UN agency).

Getting women to the top

Today, she said, though the situation of women in the country had changed, the country could do more to get women to the top and she suggested the following interventions; packages to encourage girls to have confidence to venture into avenues considered to be the exclusive of men and the creation of jobs for women and making the workplace a happy place for women.

Mrs Chinery-Hesse said when more women were in higher positions, the better it would be for the country. She, therefore, appealed for more women to be put into positions of authority.