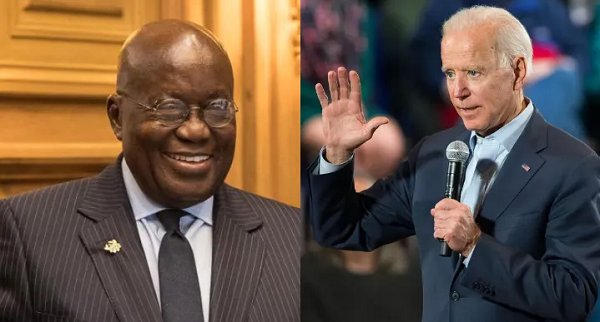 In a letter dated December 2020, Biden who will be sworn in as US President on January 20 said he regrets that he had not yet spoken to Akufo-Addo on phone.

He wrote: "It is my great honour to have been elected the next president of the United States, and I understand just how much work lies ahead of us. Vice President-elect Harris and I will take office at a time of great global challenges-from the coronavirus to climate change--that transcend borders and require international cooperation. We look forward to working with you and your government on addressing the common problems facing our countries and our peoples.

The letter was shared on Facebook by the Director of Communications at the Presidency, Mr Eugene Arhin.

What President-elect means in the US

In the US, Democrat Joe Biden is being called the president-elect.

President-elect is a descriptive term, not an official office. As such, Biden has no power in the government, and he would not until he is inaugurated at noon on January 20, 2021.

American news networks, which track all of the vote countings, determined on November 7 that Biden’s lead had become insurmountable in Pennsylvania, putting him over the 270 electoral votes needed to be president. Within minutes of determining his lead was mathematically assured, they projected him as the winner.

That is why news organizations are calling Biden the "projected winner."

Sometimes, in the case of particularly close elections, when news networks make this call, the other candidate does not concede victory. President Donald Trump has not done so, alleging voter fraud without substantial evidence and vowing to fight on. The president’s position has left Washington lawmakers divided, with Republicans backing a legal inquiry into allegations of vote fraud, even as they celebrate other congressional lawmakers who won their races.

Ghana’s main opposition party, the National Democratic Congress (NDC) has also filed a petition to the Supreme Court challenging the outcome of the December 7 presidential elections.

John Dramani Mahama, the National Democratic Congress’s candidate, got 47.4% of the vote and incumbent President Akufo-Addo 51.6%, the country’s electoral commission declared earlier this month. Mahama has described the result as “illegal” because the proper voter verification process wasn’t followed.

“The petition details serious violations of the 1992 Constitution by the Electoral Commission,” the NDC said in a statement on Wednesday. “It seeks among others, a declaration from the Supreme Court to the effect that the purported declaration of the results of the 2020 presidential election on Dec. 9 is unconstitutional, null and void.”

The NDC will also challenge the allocation of about four parliamentary seats in the High Court. The elections ended in a hung parliament, with the ruling New Patriotic Party and the NDC each winning 137 seats, while one went to an independent candidate. Mahama said his party secured an outright majority, winning 140 seats.

The challenge against the outcome of the presidential vote is the second to be filed in the Supreme Court. Akufo-Addo, the then-opposition leader filed a petition to contest the December 7, 2012 elections, which he lost to Mahama.